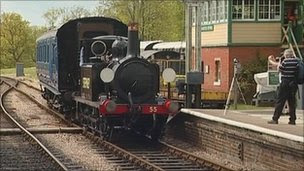 The extension of the Bluebell Railway to East Grinstead is expected to be completed by March 2013.
Work to extend the railway began more than three years ago and is costing £3.5m, with much of the cash being used to remove thousands of tonnes of rubbish from a cutting at Imberhorne.
The railway currently runs for nine miles from Sheffield Park to Kingscote, but the two mile northern extension will join it up with the national railway network and a special through train from London is due to run on 28 March 2013 to mark the event.
Mid Sussex District Council has invested £100,000 in the project, saying it will "deliver significant improvements to one of the most important tourist attractions in Mid Sussex".

The council hopes the extended railway will also attract an additional 55,000 visitors to the area each year.
http://www.bbc.co.uk/news/uk-england-sussex-19535693