A bus which replaced the double-decker destroyed in the 7 July suicide bombing has been set alight in a suspected arson attack in east London.
The bus, named the Spirit of London, was set alight in the early hours of Friday near Walthamstow Central bus station, Transport for London said.
Stagecoach said the attack was "an insult to the memory" of the 13 people killed in Tavistock Square in 2005. 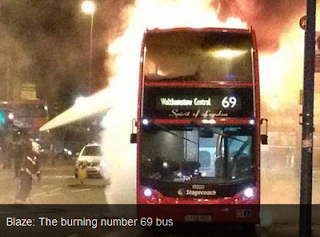 Two 14-year-old girls were charged with arson, the Metropolitan Police said.
The bus was being used on the 69 route - a 24-hour service - between Walthamstow and Canning Town.
There were no passengers on the bus at the time and no-one was injured in the incident, which took place on Selborne Walk.
Mike Weston, operations director for London Buses, said the bus which runs on several routes "suffered suspected malicious fire damage to its upper deck at Walthamstow Bus station".
A spokesman for operator Stagecoach said the "upper deck of the bus is largely burnt out".
He said: "We can confirm the bus affected was the Spirit of London, a double-decker which replaced the vehicle destroyed in the 7 July bombing in 2005, which killed 13 passengers".
The "mindless vandalism shows a complete disregard for the safety of other people and is an insult to the memory of those who lost their lives in those terrible events of seven years ago", he added.
"We have assessed the condition of the bus and it can be repaired. We will be spending £50,000 to restore the Spirit of London bus to ensure it remains a fitting tribute."
The bombing of a number 30 bus in Tavistock Square in central London came nearly an hour after the three bombs went off on Tube trains at Aldgate, Edgware Road and Russell Square in 2005.
The suicide bomb attacks claimed the lives of 52 people.
The bus was named as the Spirit of London by former London Mayor Ken Livingstone and brought into service in October 2005.