Following the rethink over the West Coast mainline franchise, MPs have demanded the Department of Transport's (DfT) decision on Thameslink trains be looked at again. In 2011 the £1.4bn deal for new carriages for London's Thameslink project was awarded to German firm Siemens. 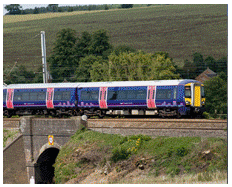 Six MPs are calling for a review of a contract which snubbed Derby train maker Bombardier.
The loss of the Thameslink contract led to a series of protests in Derby and Westminster, claiming it undermined British manufacturing.

Despite this, the government insisted the selection process had been fair and there would be no U-turn.
But earlier this week the Transport Secretary Patrick McLoughlin suspended the awarding of the West Coast franchise, admitting the process was flawed.
This was only weeks after he appeared before the Commons Transport Select Committee, assuring it that "due diligence" had been carried out.
Four Conservative MPs; Mid Derbyshire's Pauline Latham; Amber Valley's Nigel Mills; South Derbyshire's Heather Wheeler and Burton's Andrew Griffiths have now written to Mr McLoughlin to ask for the signing of the Thameslink contract, due in January 2013, to be postponed.

Mrs Latham said: "The Department for Transport isn't working properly for the benefit of taxpayers and I do believe this is a limited opportunity, but an opportunity, for that department to look again at the contract they awarded to Siemens.
"It hasn't gone through yet, it hasn't been signed, and I think they could and should look again at the contract because I don't want any more jobs to be lost from this area because it is very important to the economy of Derby."
Backing the demand are Derby Labour MPs Margaret Beckett and Chris Williamson.
A DfT said: "We have every confidence in the evaluation process that was undertaken in 2011 for new fleet of new trains for the Thameslink project.
"Siemens was awarded preferred bidder status as its bid was best value for money."
By early 2012 Bombardier had laid off about 1,000 contractors and 200 permanent staff but said there was enough work to guarantee the factory's "short term" future.