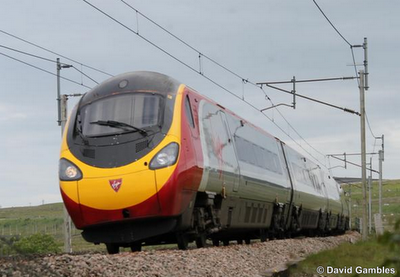 Following the announcement yesterday that the competition to run the West Coast rail franchise would have to be re-run, taxpayers will pick up an immediate £40m bill for compensating the four shortlisted companies that bid for the west coast franchise. Beyond the compensation bill for those companies and others involved in franchise auctions that will now be paused, the department may also find itself a hostage to the operators running the rest of Britain's railways, as the timetable for renewing contracts slips. An industry source said: "I think they have no option but to extend franchises that are next for renewal. It will cost them a fortune."
Virgin Trains, which looked set for imminent extinction, is now confident it will be allowed to run the west coast service in the interim, andBranson said he hoped a new, transparent process would mean his company could also soon target the east coast line again.
It has emerged that the previous transport secretary, Justine Greening, had ordered an investigation in late August when she was first informed by officials that a "small procedural error" may have occurred. She is said to be "fully supportive" of McLoughlin's targeting of officials, who she believes suppressed information when giving categorical assurances that Virgin had no basis for a legal appeal.
But the news raises the question of whether ministers were reshuffled by David Cameron last month in part to save them from resigning. Greening's then deputy, the new Northern Ireland secretary Theresa Villiers, was a major proponent of controversial longer franchises and took the decision to give the west coast franchise to FirstGroup.
Shadow transport secretary Maria Eagle said: "The prime minister should come clean on when he knew, and on any connection with the decision to conduct a wholesale clearout of Tory transport ministers before this fiasco became public."
The DfT discovered the flaws as it was preparing to contest the judicial review Virgin sought in the high court after losing the franchise on 15 August. McLoughlin said: "Some of the points Richard Branson made were found to be correct, but there were things that were more wide-ranging … That's why I took the decision last night to go back to the drawing board."
A report into what went wrong with the west coast bidding process is due at the end of the month. Virgin's case was that the forecasts and figures from the DfT did not add up, leading to an excessive level of risk in FirstGroup's winning bid.
Virgin and McLoughlin held talks to discuss options on Wednesday evening. The transport secretary was set to invite the state-owned Directly Operated Railways (DOR) to run the service when the current franchise expires on 9 December, had Virgin's legal proceedings delayed the new contract with FirstGroup. That development hardened some Virgin insiders' view that a "hard core" at the department "just don't like us".
Branson had offered to run the service "for free" while the row was resolved but that offer is now likely to be moderated. Staff at Virgin believe the DOR option was intended "to rub our noses in it".
Branson said: "I'm pleased we didn't have to go to court and that the minister has been so fulsome in his apologies, and pleased that he's going to do a complete overhaul."

The three unnamed civil servants were suspended by the department's permanent secretary, Philip Rutnam. "The errors exposed by our investigation are deeply concerning. They show a lack of good process and a lack of proper quality assurance," he said.
McLoughlin has ordered two independent reviews: in addition to the one due at end of the month, which will be overseen by Centrica's chief executive, Sam Laidlaw, there will be a second, under Eurostar chairman Richard Brown, which will examine the wider rail franchising programme to see what changes may be needed to get the other bidding procedures back on track. The three outstanding franchise auctions now on hold are Great Western, Essex Thameside and Thameslink.

A furious Tim O'Toole, the FirstGroup chief executive, said: "We don't have a clear understanding of what went wrong. We've been promised an explanation. The only thing they've made clear is that there was nothing wrong with our bid." Shares in FirstGroup fell almost 20% on the news.
FirstGroup's bid, with payments heavily loaded towards the back end of the 13-year franchise, offered premiums far in excess of the £190m bond it was offering as security.  The other two shortlisted bidders, Abellio and Keolis, backed by the Dutch and French state railways, bid far less even than Virgin.
Whoever takes over after 9 December, McLoughlin said passengers would continue to be served by the same trains and front-line staff.
http://www.guardian.co.uk/uk/2012/oct/03/virgin-rail-west-coast