According to figures issued by the Department for Transport, every train firm except one was helped out by the taxpayer. Just one train operating company wasn't subsidised overall last year, according to the latest figures from the Department for Transport, and that was First Capital Connect, which runs trains from London, Brighton, Bedford, Peterborough, Cambridge and King's Lynn.
At the other end of the scale, Northern Rail got nearly 35p back for every passenger mile travelled on their trains (this figures does not include Scotrail and Arriva Trains Wales that are subsidised separately  by the Scottish Parliament and Welsh Assembly). 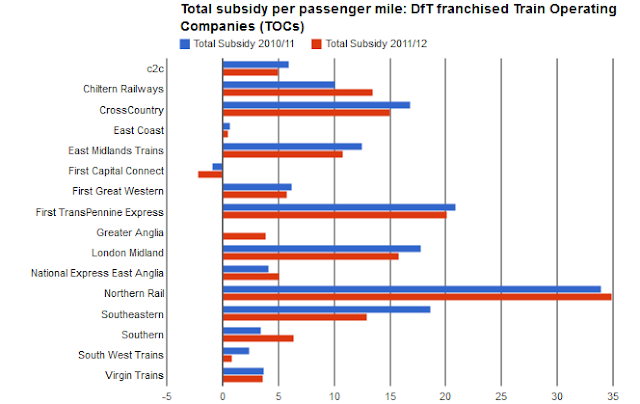 Information broken down by: Train operator and type of subsidy
1. Negative figures reflect where train operators were paying a premium to DfT rather than receiving a subsidy.
2. The National Express East Anglia franchise ended on 5 February 2012 when Greater Anglia took over the franchise.