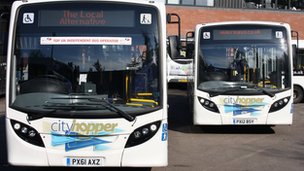 Reays is adding extra buses to two of the Carlisle City Hopper routes, and is lengthening another to meet demand.
The announcement was made on the second anniversary of the service, which now carries more than 25,000 passengers a week.
Most of the jobs are for Carlisle-based drivers but there are also vacancies at its Wigton headquarters.
Managing director Chris Reay said: "City Hopper is continuing to go from strength to strength and we are absolutely delighted to celebrate our second birthday by introducing these latest changes for the benefit of our passengers."
As well as the City Hopper, which runs seven routes throughout Carlisle and out to Wigton and Dalston, the family-run firm also operates a fleet of private-hire coaches, and the Sellafield staff park and ride service.
http://www.bbc.co.uk/news/uk-england-cumbria-19783993