Vulcan to be Grounded

The last airworthy Vulcan bomber will fly for the final time next year, the trust which funds the aircraft has confirmed.
The XH558 has been based at South Yorkshire's Robin Hood Airport since March 2011 after the RAF Lyneham base closure was announced. 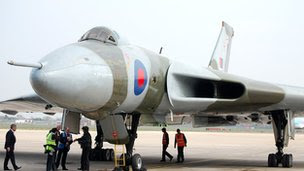 It has been decided that "challenging modifications" to both wings would not be sustainable to the old aircraft.
The Vulcan to the Sky Trust said it decided not to fund the repairs.
Trust chief executive Dr Robert Pleming told supporters: "At the end of next year, she will need a £200,000 modification to her wings to increase her flying life.
"We know that you would do your upmost to fund this work, but for a number of reasons we have decided not to ask you to take this risk."
In May, Doncaster Robin Hood Airport was forced to close temporarily after the Vulcan bomber aborted take-off due to an engine fault.
The trust's engineering director Andrew Edmondson added: "There is no possibility of rectification if an error is made. We are not saying we cannot do it, just that it is risky so other factors must be taken into account."
Mr Edmondson added: "From the start of the 2014 season, it is unlikely that we could accommodate any engine failures.
"There are no more airworthy engines available, and refurbishment would be so difficult and costly that there is no possibility that it will happen."
Vulcan to the Sky Trust, which has kept the bomber in the skies for six years, said it needed in excess of £1m to carry out repairs and maintenance in coming months.
The Vulcan XH558 took its first flight on 25 May 1960 and was originally built to carry nuclear weapons but was only ever used as a nuclear deterrent.
The bomber retired from service in 1993 and is the only airworthy example left of the 134 that were built for the Royal Air Force.