It is the 25th anniversary of the fire at King's Cross Underground station when thirty one people died when a fire on a wooden escalator engulfed part of the London station on 18 November 1987.
The blaze is thought to have been started by a dropped match and led to a smoking ban at Tube stations.
More than 100 people were taken to hospital after the King's Cross fire, after becoming trapped as the escalator went up in flames.
About 150 firefighters wearing breathing apparatus fought the blaze. One of them - fireman Colin Townsley - was among the dead.
He was awarded, posthumously, a certificate of commendation for his bravery, as were five other firemen who survived.
In 2004, the final victim of the blaze was finally identified as 72-year-old Alexander Fallon, a Scottish man living rough in London at the time. 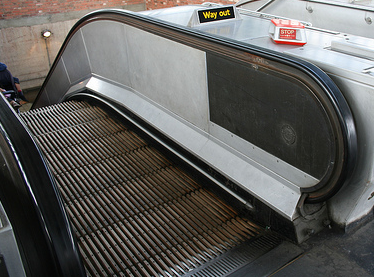 After the King's Cross fire, wooden escalators were phased out in favour of metal replacements and smoking was banned at stations. It had already been banned on Underground trains.
Nobody has ever been prosecuted over the fire. The Director of Public Prosecutions and the Railway Inspectorate said there was "no justification" for charges.