Abellio and the ScotRail franchise

THE Dutch state-owned rail firm Abellio is to bid to take over train services in Scotland, promising to give passengers better information and improved connections with other forms of transport.
The overseas operator has expanded into several European countries – including England, where it runs three train firms – and has now announced its intent to compete for the ScotRail franchise when the current contract, operated by Aberdeen-based First Group, expires at the end of 2014. 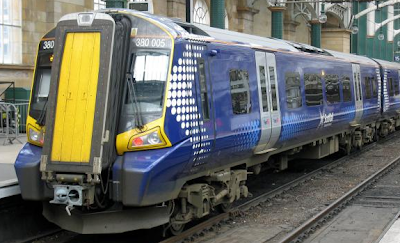 Its interest has been welcomed by rail watchdog Passenger Focus, which said its parent company, Nederlandse Spoorwegen (Netherlands Railways), had built up an excellent reputation for customer service and engaging with politicians and rail groups.
Nederlandse Spoorwegen runs the majority of Dutch train services, including commuter and intercity high-speed services, and boasts that 93% of its services arrive within five minutes of schedule. Passengers delayed for more than half-an-hour on long-distance services are entitled to a refund worth half the ticket price on most services, with a full refund if the delay is longer than an hour.
One of the firm's principles is focusing on "home to home journeys", taking into account connections with buses and other forms of public transport.
But its interest in Scotland could prove controversial, as ministers have expressed public frustration over reserved legislation that allows foreign state-owned train companies to bid to run rail services but would prevent a not-for-profit body set up by the Scottish Government from bidding.
A competition to take over ScotRail, which operates more than 95% of passenger services in Scotland, will get under way next year, with the winner due to be announced in May 2014. Abellio is the first firm to throw its hat into the ring although First, the UK's biggest train operator, confirmed it would bid to retain the franchise.
Stagecoach, the Perth-based transport company with a 49% stake in Virgin Trains, said it would decide whether to bid for ScotRail when details of the bidding process are published by Transport Scotland
Abellio said it was establishing an "experienced" bidding team in an effort to secure the contract. It will also bid to run the London-to-Scotland Caledonian Sleeper service, which is currently part of ScotRail but is due to be split off into a separate company in December 2014. Both are worth an estimated £3 billion in Government subsidies over the next decade.
Robert Samson, Passenger Focus's manager for Scotland, said Abellio had a good track record. "They are very strong on community relations and taking on board what passengers and other stakeholders say they want," he said.