Trains are once again in full service on a historic rail line after volunteers raised £1m to repair the route.
Gloucestershire Warwickshire Railway (GWR) has re-opened the full-length line from Cheltenham Racecourse to Laverton, which takes in Gotherington, Winchcombe and Toddington.
The collapse of two century-old embankments in Gotherington and near Winchcombe had caused three years of disruptions on the volunteer-run railway, which dates back to 1904.
From this weekend steam engines will operate between Cheltenham and Winchcombe, with diesel trains running between Winchcombe and Toddington.
This means there is a service from Cheltenham to Laverton for the first time since 1979.
Passengers can travel the full 12-mile route by changing trains at Winchcombe, and from next year there will be an intensive service running along the whole line.
GWR chairman Malcolm Temple said he was "overwhelmed by the generosity" of people who had made a donation to repair the line.
He said: "That includes individuals who have put anything from a pound or so in a collection bucket to donating significant sums, including those who signed up as '300 Club' members by contributing £1,000 or more."
Mr Temple added: "Other railways have really rallied round to help and we'll never forget the very significant contribution that so many heritage railways have made.
"I'd especially like to acknowledge the contribution made by readers of Steam Railway magazine, who have put their hands in their pockets to the tune of £70,000 to what is, after all, restoration of an earth embankment."
The embankment at Gotherington collapsed in March 2010, while the 'Chicken Curve' part of the line was damaged by a landslide in January 2011.
GWR took over the route in 1981, following the removal of the track and closure of the line by British Rail in 1976.
From 1984, GWR volunteers have steadily restored the line, building signal boxes, station houses and replacing lost signalling and other infrastructure. 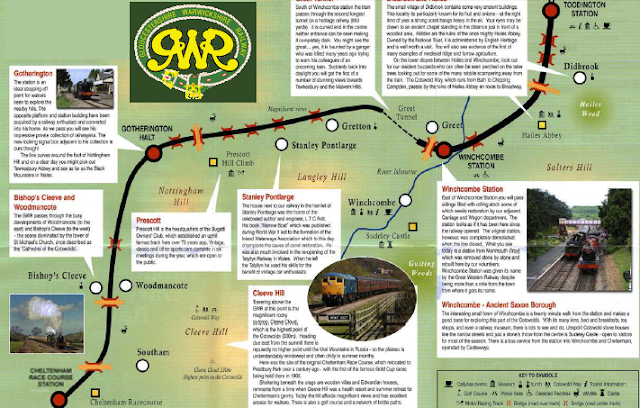