A multi million-pound transport scheme in Grimsby has been approved by councillors who hope it will boost the local economy.
Work on the £5.15m improvements for Riverhead Square and Station Approach will now start in the spring. 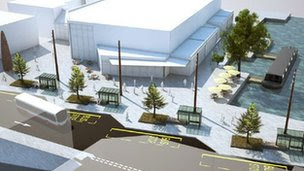 The bus station will be redesigned and repositioned within Riverhead Square to allow for expansion of the Freshney Place shopping centre.
The station will also include a cycling hub for people to park or hire bikes.
Links to the bus station will be improved, some bus stops will be relocated and electronic passenger information signs added. One-way systems on some streets will also be introduced or reversed.
Most of the scheme will be funded with a £4.3m government grant, with the rest coming from North East Lincolnshire Council.
Councillor Peter Wheatley, portfolio holder for regeneration, said: "The funding we received has allowed us to design a number of significant improvements to the public and sustainable transport networks, which will help to encourage development, create jobs and improve levels of accessibility."
Jason Longhurst, the council's head of development, said: "We've worked closely with a number of local businesses, community transport groups and other organisations, including Stagecoach and Grosvenor, the owners of Freshney Place, to develop the proposals, so we're confident what will be delivered will be a major asset for the town centre and the people and businesses using it.
"The award of the (government) funding for this was one of the biggest in the country and shows the town is punching above its weight in terms of attracting investment of this type."