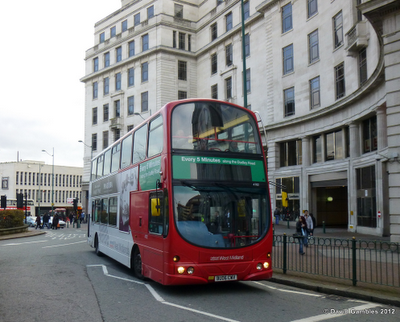 Overview
Overall, Group trading remains resilient, despite the increasing challenges of austerity. Group profit is on target to meet the Board’s expectations for the year.
Key developments in the third quarter have included:
Dean Finch, Group Chief Executive, commented:
“We continue to deliver a robust performance, despite austerity pressures on public and consumer budgets. We are focused on our fleet investment, on driving greater cost efficiency and are relentless in our focus on customer service. We are playing an active part in the current review of the UK rail refranchising programme and are developing a pipeline of opportunities across our portfolio in the US, Europe and North Africa to drive medium-term growth.”

UK Bus
The UK Bus business is performing well. Revenue and profit have continued to grow, with commercial revenue up 3% year-to-date. Overall ridership is stable, with positive results seen from the deployment of over £30m of capital investment in 2012. Both labour costs and increased concessionary fares have been secured under new medium term arrangements. 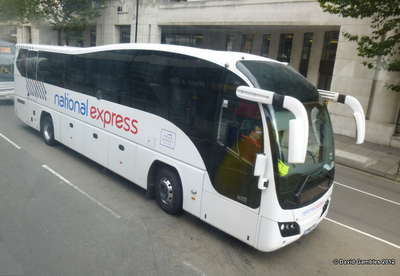 This has been a difficult year for the UK Coach business. The withdrawal of the government’s concessionary scheme has severely affected the affordability of travel for our senior citizen passengers, with a million fewer concessionary journeys expected in 2012. To offset this, we have invested in our network, adding new routes and frequencies, with non-concessionary revenue on the express coach business up 1% year-to-date. With intense price competition on competing rail journeys, we have discounted fares through the summer, driving stronger non-concessionary volume growth, up 4% year-to-date and fully offsetting the concessionary passenger shortfall for the first time in September. Olympic-related contract work also benefitted the third quarter; however, we expect the majority of the £15 million annual concessionary income loss to impact profit in the current year.
Rail
Our c2c rail franchise continues to lead the industry, winning Train Operating Company of the Year at the National Transport Awards. Revenue continued to grow, supported by a successful Olympic and Paralympic Games, which saw c2c provide an extra 1.5 million seats. The franchise has now set a new record for punctuality at 97.2%*. We had submitted a strong bid to retain c2c from May 2013, prior to the overall refranchising process being frozen by the Department for Transport on 3 October. Our Great Western bid is also ready for submission. We are working with the Department on its current review and continue to support the refranchising programme.
Our business development team is working on a pipeline of smaller rail contract tenders in Germany, and is monitoring planned future rail liberalisation in Spain.
Financial Position and outlook
The Group’s financial position remains strong, with substantial headroom under our debt facilities and a sound dividend policy. Fitch Ratings recently reaffirmed its stable, investment grade rating of the Group.
The Group has completed its fuel hedging programme for 2013, at an average Brent oil equivalent price of $100/barrel (48 pence/litre, compared to 43p for 2012). This will result in 2013 fuel costs increasing by approximately £11 million year-on-year (UK Bus £3m, Spain £4m, North America £4m).
Further analysis of the forthcoming IAS 19 pension accounting change in 2013 has confirmed a limited adverse impact, of approximately £2 million to the UK Bus division earnings, with negligible effect on operating profit in other divisions or on the Group interest charge.
The Group remains on track to deliver its profit expectations for 2012. The outlook for 2013 remains challenging with low economic growth, government funding pressure and fuel cost inflation likely to constrain progress. However, our developing pipeline of opportunities in new and liberalising markets will present attractive avenues for growth. With our proven management team, the diversity of our businesses and continued growth in demand for high quality public transportation, we have confidence in our long term prospects. 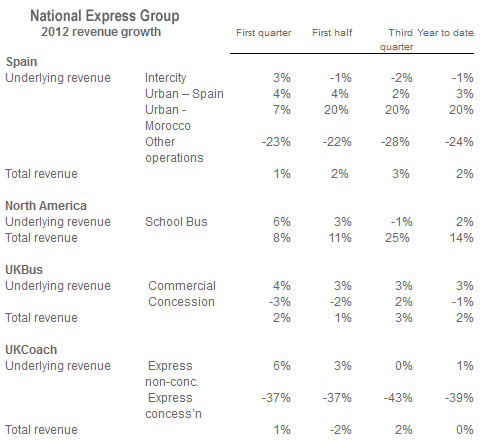