Your Focus team are at Euro Bus Expo in Birmingham. One of the stars of the show is the new Plaxton Elite i, ( i for Interdeck) delivering 75 seats in a 15m-long coach which provides roll-on wheelchair access and a class-leading 15 cu m of luggage space.

The entire project started just 10 months ago. A full length floor extends over the driver’s compartment to give 71 seats, with a further four seats in the lower saloon and wheelchair access without the need for a lift.

The Elite i provides 23 per cent more seats than a standard 15m vehicle, which means that an operator will require up to 19 per cent less vehicle movements to transport 1,000 passengers. “The Elite i caters for a niche market but our strength lies not just in our ability to respond to major product developments like this, but in working with all of our customers, being able to tailor individual vehicles to meet the demanding requirements of the market place,” says Kevin Wood of Plaxton.
In developing the new model, Plaxton had to take into account the new European Whole Vehicle Type Approval system. The requirements of EWVTA would have meant that the existing 15m platform would have had capacity reduced from 65 to 61 seats and the brief for the new interdeck product was to ensure that it had at least 65 seats; a target that it exceeded comfortably.

Also on display for the first time is The new Enviro500 which has been designed as a fully integrated product with styling brought closer to the two-axle Enviro400, which is also operating in Hong Kong with further vehicles ordered for KMB and Citybus.

The three-axle Enviro500 has been extensively redesigned to reduce weight and deliver improved fuel economy of up to 10 per cent compared to the previous model, while providing greater commonality of parts with the Enviro400. 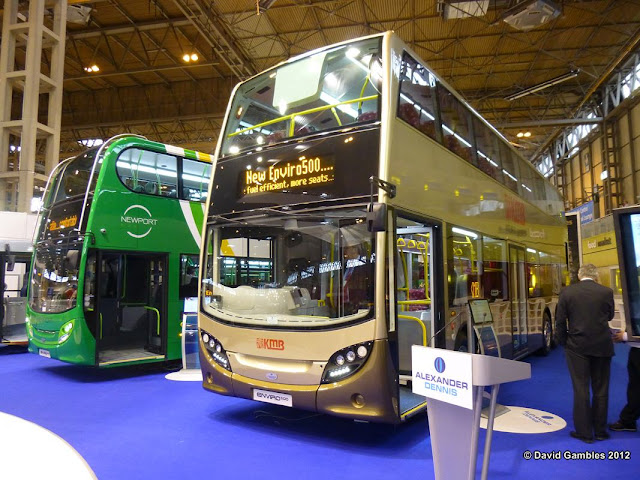 A new Square-Case staircase which maximises capacity to provide a total of 90 seats - 59 upstairs and 31 in the lower saloon plus 46 standees and a wheelchair space. The slope in the lower saloon has also been reduced from 6 to 3.5 degrees, enabling a conventional rear five-seat cushion to replace the previous cut-down squab, and a 90mm increase in lower saloon rear headroom.

The fuel tank has been relocated under the staircase, and reduced to 350l capacity in view of the improved fuel economy, and the battery compartment placed at the nearside rear which ADL says reduces cable runs (and weight) and improves starting efficiency.

In the North American market, ADL is delivering the first of its new Lo-Height Enviro500s which have adopted an Enviro400-style front end, with overall height reduced to 13’7’’ from the previous 14’, but with upper deck headroom maintained at 5’7’’, and more than 6’ headroom in the flat floor area of the lower saloon.

The first 30 of an order for 75 started service in Ottowa for OC Transpo last month and the remainder will be delivered by March 2013. The first of 25 for Go Transit in Toronto are now being delivered with the balance in service by early next year.

The driver’s cab has been lowered by 120mm in the redesign and the batteries and fuel tank relocated, with luggage capacity of 4.2 cu m.

Looking to the future, the next major project is a complete overhaul of ADL’s flagship Enviro400 double-deck product for the UK market. Plaxton says the company is aiming to “raise the bar” with a focus on fuel efficiency, reliability, maintainability and whole life costs. The new model will be available late next year to coincide with the introduction of Euro 6.


More pictures from EuroBus Expo tomorrow at 7.30am