Plans for a high-speed rail link between Glasgow and Edinburgh, cutting journey times to less than 30 minutes, are being taken forward by ministers.
The Scottish government aims to deliver the scheme by 2024 - at least 10 years before any high-speed link from England may be extended north of the border. 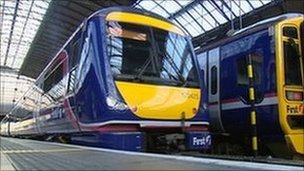 If successful, it would see 140mph trains linking Glasgow and Edinburgh.
Talks will now take place between transport officials, the rail industry and potential partners in both cities.
Plans have already been announced at Westminster to have the high-speed project, known as HS2, running between England's major cities.
'Firing ahead' Phase one of the £33bn link, between London and Birmingham, is due to start operating in 2026.
The UK government has previously said this would be followed by a second phase route reaching Manchester and Leeds by about 2033


As yet, there has been no dated or written commitment to extend the scheme to Glasgow and Edinburgh.
Deputy First Minister Nicola Sturgeon said the Scottish government would "not wait" for Westminster to deliver HS2 north of the border and would be "firing ahead" with its own plans.
She said that a survey last year, carried out by the Scottish Partnership Group for High Speed Rail, had shown "a huge level of support" for HS2 in Scotland.
The findings, published in the Fast Track Scotland (FTS) document, claimed an HS2 link to London could benefit Scotland by up to £25bn.

After the document was published, Transport Scotland, on behalf of the FTS group, looked at how quickly HS2 could be delivered.
Ms Sturgeon said its findings demonstrated that Scotland could introduce HS2 way ahead of any Westminster timetable.
"We now know that within just 12 years, we could build a line which will see journey times between our two major cities cut to less than half an hour," she said.
"That will benefit our businesses, our jobs market and also our tourism industry, and it will put us up there with the world's greatest transport networks.
"The Scottish government will now enter into talks with our partners in both cities and the rail industry to see how we can work together to see this vision realised - a Glasgow-Edinburgh high speed line which can connect to the network from England."

A spokesman for the UK Department for Transport said HS2 was "a vital project" that would "transform the entire country".
He said: "This is a truly British network that will serve far more than the cities directly on the line - seamless transition of trains on to the East Coast and West Coast main lines is expected to slash the journey time between Edinburgh and Glasgow to London by up to an hour without the need to change trains."
The spokesman said the government would publish its preferred route for the second phase before the end of the year.
He added: "Additionally, the secretary of state announced last month that he has asked officials to work with the Scottish government to explore how best to boost capacity and cut journey times further so that Scotland can be fully brought into our vision for a high speed Britain."