Steam Engine back on the tracks

A narrow gauge steam engine is going back on the tracks 149 years after rail pioneers said it was not cut out for a life pulling slate in north Wales. 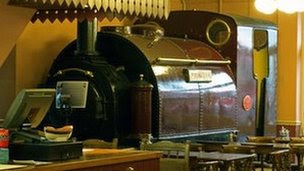 'The Princess' worked the Ffestiniog rail line at Porthmadog after being built in London in 1863.
Following a revamp this winter it is to make a return journey to go on show at Paddington station.
It was being removed on Saturday from its home at Spooner's Pub at Harbour Station where it became a fixture.
Experts at Ffestiniog railway say it is regarded as the world's first narrow gauge steam locomotive.
And they add that it was the last to work the tracks when the line closed to slate in 1946.
Enthusiasts who started to reopen the line from 1955 put the engine into storage.
They eventually restored it and made the pub its final destination in 1981.
On Saturday passers-by in Porthmadog will see it hauled from the pub and taken along its old tracks to return to a workshop for some "tender loving care".
Once the work is complete the Princess will make a journey south to London's Paddington station.
It will eventually be put on display during St David's Day celebrations in London as well as being used at a number of other events throughout the year to mark its 150th anniversary.