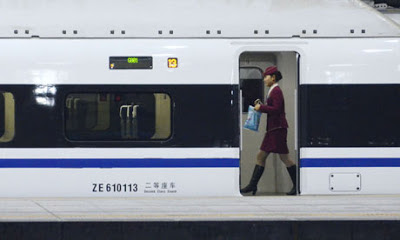 The first bullet train left Beijing on Wednesday morning. Trains will initially travel at 300km/h (187mph), more than halving travel time.
A Chinese official has described the route - parts of which were already in operation - as "one of the most technically advanced in the world".
The 2,298km route will have 35 stops.
They include such major cities as Wuhan and Changsha.
The previously 22-hour journey will now take less than 10 hours.
The decision was taken to start the passenger service on 26 December to commemorate the birth of former Chinese leader Mao Zedong, state media said.
China is currently expanding its high-speed rail network across the vast country.
The world's longest line consists of four main divisions, running between the capital, Beijing, the central transport hub Zhengzhou in Henan province, Wuhan in central China, and Guangzhou. The line connecting Wuhan and Guangzhou opened in 2009, and the one between Beijing and Zhengzhou held its first trial run over the weekend.
The line stops in 35 cities and will eventually reach Hong Kong. According to the state news service, Xinhua, 155 pairs of trains will run every day. Older trains connecting the two cities will remain in service.
Business-class tickets on the line sell for £270, more than a month's salary for many of Beijing's low-level white-collar workers. Standard seats cost £86, about twice as much as a bunk on an older train though slightly cheaper than most flights.
China's high-speed rail programme was established in 2007, and its first line, connecting Beijing and nearby Tianjin, opened just before the 2008 Beijing Olympics. The system now has more than 5,780 miles of track.
But the ambitious project has not been free from controversy.
Forty people died last summer in a crash on a rapid train line in eastern Zhejiang province and the entire high-speed scheme has been dogged with reports of corruption.