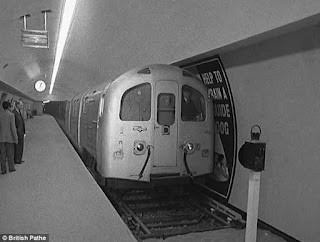 
London's iconic Underground system celebrates its 150th birthday and here are some of the major changes and developments that have taken place since the first train left Bishop's Road on January 9 1863.


1863: London's underground Metropolitan or Met welcomes its first passengers. Within a month it would be welcoming 26,000 passengers a day.
1905: The District and Circle Lines become the first to become electrified
1908: The Underground name and the iconic round symbol with a flat horizontal bar through it appear for the first time.
1911: The first escalators are turned on at Earl's Court station.
1929: Manual doors are used on the Underground for the last time with air operated doors used for the first time.
1933: The first Underground map in its recognisable modern form is produced by Harry Beck.
1940: The Underground played a key role in the Second World War, stations being used for the first time as shelters during the Blitz and a stretch of the Picadilly Line used to store treasures from the British Museum
1952: The first aluminium trains are introduced.
1969: Queen Elizabeth II takes the controls of a train as she opens the Victoria Line
1971: The last steam shuntings and freight locomotives use the Underground.
1975: 43 people are killed in a train crash on the Northern Line at Moorgate.

London Underground has always played a hugely important role in the success of London - from the growth of the early network which led to the expansion of the suburbs in the last century, to the development of Canary Wharf’s financial powerhouse in the 80s, and on to today’s system which successfully moved record numbers of people during the Queen’s Jubilee and London 2012 Games.