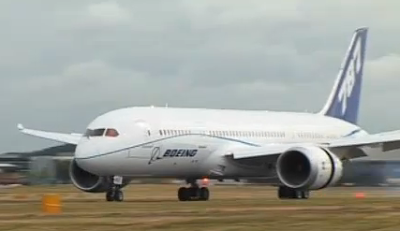 US regulators have ordered a review of the 787 Dreamliner plane after a series of incidents put a question mark over the safety of Boeing's flagship plane.
The review by the Federal Aviation Administration will look at the design and manufacture of the planes.
The planes will not be grounded while the safety review is carried out.
An electrical fire, a brake problem, a fuel spill and cracks in the cockpit's windshield have affected Dreamliner flights in the past week.
FAA administrator Michael Huerta told a news conference that nothing in the data the agency had seen suggested the plane was not safe, thought it still felt the review was necessary.
In a statement, Boeing said: "Boeing is confident in the design and performance of the 787. It is a safe and efficient airplane.
"The airplane has logged 50,000 hours of flight and there are more than 150 flights occurring daily."
The Boeing 787 Dreamliner is one of the most advanced aeroplanes ever created. Much of it is made from very strong, light carbon-fibre composite material.
However, a spate of technical issues has hurt its image. On Friday, two new problems were found, adding to Boeing's woes.

On Friday, All Nippon Airways reported a crack in the window on the pilot's side of the cockpit. It caused no problems for the 237 passengers and nine crew on a flight from Tokyo's Haneda airport to Matsuyama, but the return flight was cancelled
The same airline said another Dreamliner flight, shuttling between Haneda and the southern Miyazaki prefecture, experienced a delay due to an oil leak from a generator inside an engine
On Wednesday, ANA cancelled a 787 flight from Yamaguchi to Tokyo because of a brake problem
On Tuesday, Japan Airlines cancelled a Boston to Tokyo flight after about 40 gallons (151 litres) of fuel spilled
An electrical fire broke out on board a Japan Airlines Dreamliner on Monday shortly after it landed in Boston, following a flight from Tokyo
Last year, a United Airlines flight was forced to make an emergency landing because of an electrical problem In December, Qatar Airways grounded one of its 787 Dreamliners after several manufacturing faults caused electrical problems similar to those that affected the United plane.
Last month, the head of Qatar Airways criticised Boeing in an interview with the BBC over several manufacturing faults that have resulted in the grounding of one of its three 787 Dreamliner aircraft.

Boeing has delivered 50 of the 787s, starting in late 2011, and has orders for nearly 800 more. To get through the backlog, Boeing is increasing production to build 10 of the planes per month by the end of the year.

By comparison, it builds more than one 737, Boeing's best seller, every day.