Yesterday U.S. officials joined Japan's probe into 787 jets after all 50 of the 787s in use around the world have been stopped from flying.

A worldwide grounding of Boeing’s ‘revolutionary’ 787 Dreamliner jets is due to a burned out battery. Photographs of the charred remains of lithium ion batteries from two separate incidents resulting in the grounding of Japanese Boeing Dreamliners indicate it operated at a voltage above its design limit.


The new generation of light lithium batteries was going to deliver equal power at half the weight, but it appears that the chemistry inside the ‘thermal runway’ can self-heat if external temperature and pressure change, something which frequently occurs in aviation. Concerns over the battery, prompted by an emergency landing of an All Nippon Airways plane on Wednesday, has seen the plane grounded across the globe.
The American investigators - one each from the Federal Aviation Administration and the National Transportation Safety Board and two from Boeing Co. - today inspected the ANA jet on the tarmac at Takamatsu airport in western Japan.
An initial inspection by Japanese officials of the 787 found that a flammable battery fluid known as electrolyte had leaked from the plane's main lithium-ion battery beneath the cockpit. It also found burn marks around the battery. 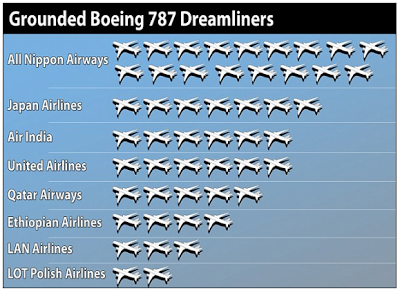 So far, eight airlines fly the ‘plastic plane’, so-called because its fuselage is ‘spun’ from super-strong but lightweight carbon fibre, which cuts weight and fuel consumption, rather than constructed from aluminium.