The HS2 line will have a new station at Meadowhall, Sheffield, allowing passengers to interchange with existing train services as well as bus, coach and tram.
The wording below describes how the station will be integrated into the existing transport infrastructure. It was fascinating to read elsewhere in the report that the site of Sheffield Victoria station was also considered in the decision process - the Great Central would really have been re-created if that scheme had been adopted! 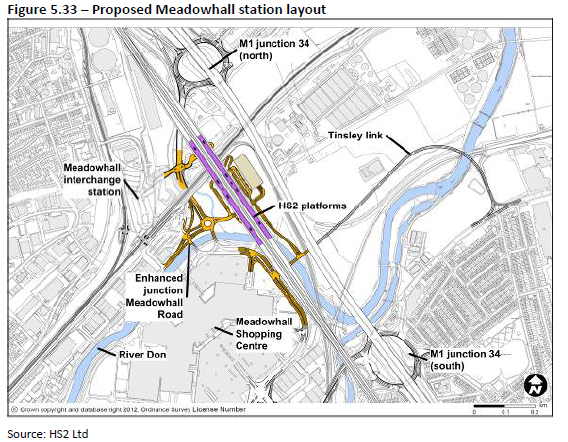 5.6.50 At ground level, the four-platform Network Rail station at Meadowhall Interchange would remain. There is potential for modification to some or all of the existing station in order to improve the interchange with high speed services. We assume the movement of platforms on the Sheffield to Rotherham line to provide better interchange with HS2 platforms and have included this cost. New platforms are proposed on the Supertram line which would pass underneath the station.
5.6.51 The station would have multiple entrances, for access to and from different travel modes. The primary station entrances and main concourse building with ticket hall and other station facilities would be located at ground level, beneath the viaduct. A series of escalators and lifts would provide vertical circulation for access to an upper concourse.
5.6.52 At the upper concourse, a bridge would lead directly to the Supertram and Meadowhall Interchange. A further bridge on this level would give direct access to a multi-storey car parking structure.
5.6.53 The station would be located in between Sheffield and Rotherham and would be easily accessed from both as well as from the M1. The roads in that area are already very heavily loaded so there would need to be capacity improvements to support a station and other developments planned in the area. Road access would be provided by means of a road connection to the existing road network and to address capacity constraints. Further interventions could range from widening and reconfiguration of the roundabouts on M1 Junction 34 to new roads and links onto and from the M1. Were this option to progress, the level of provision of capacity enhancements would need to be determined in conjunction with the Highways Agency and local transport authorities.