The proposed routes of the northern section of HS2 have been announced this morning. Maps showing the locations of new stations in the West Midlands, north west, East Midlands and Yorkshire were unveiled as Ministers underlined the government’s absolute commitment to investing in the infrastructure that Britain needs to compete and succeed in the global economy.
The publication of the 211-mile northern phase two route of HS2, part of the government’s mid-term review, follows the confirmation a year ago of HS2’s 140-mile southern phase one route between London and Birmingham, which starts construction in four years and opens to passengers in 13 years. The routes announced today, running from Birmingham to Manchester and Leeds, will open six years after that.

According to the DfT website "New stations at Manchester, Manchester Airport, Leeds, Sheffield and the East Midlands will bring communities and businesses in and around those areas closer together with each other, Birmingham, London and beyond. Crewe will be served by a dedicated link alongside the high speed line. Local transport connections around all high speed stations, particularly at non-city centre locations, will be enhanced.
HS2 will be integrated with the existing national railway network, meaning cities and towns beyond the high speed track up to Scotland – including Liverpool, Glasgow, Edinburgh, Newcastle, York, Preston, Warrington, Lancaster, Carlisle, Durham and Darlington - will also benefit from new connections and substantial time savings due to new trains able to use both high speed and conventional railway lines.
HS2 will free up capacity on existing rail lines for more commuter, rural and freight services, and mean fewer cars and lorries on our roads, cutting congestion and carbon.
HS2 brings the additional benefits of dramatic journey time savings. Manchester city centre will be 41 minutes from Birmingham city centre and 1 hour 8 minutes from London Euston, almost halving their durations today. Leeds will be 57 minutes away from Birmingham city centre, compared to 1 hour 58 today, and 1 hour 22 minutes away from London Euston, down from 2 hours 12 minutes today. HS2 stations at Leeds, Sheffield, East Midlands and Birmingham will each be separated from the next by journey times of under 20 minutes.
Ticket prices on HS2 will be set in order that the new rail services can be accessed by all.
HS2 has a robust business case that delivers £2 of benefit for every £1 spent, even before wider economic benefits are calculated."

Detailed maps showing individual sections of routes can be found here
It is fascinating to see that the route runs very close to Heath and Staveley in Derbyshire, re-creating the route of the Great Central Railway! (see map below) 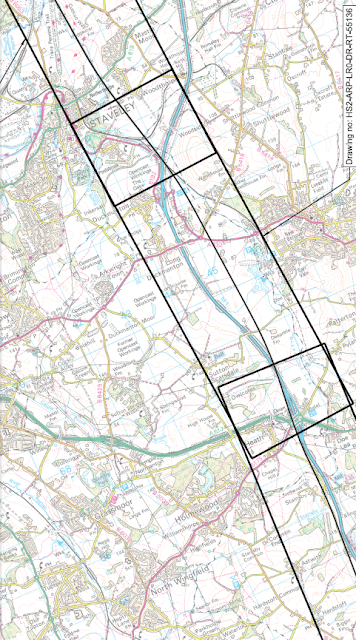