A new rail link that completes an orbital route on London Overground has carried its millionth passenger after being open for just over a month.
The 6.76-mile long £75m rail link, which joins Surrey Quays in the south-east with Clapham Junction in south London, opened on 9 December 2012,
The one millionth passenger travelled at around 14:00 GMT on 10 December.
Transport for London (TfL) said: "Demand has been growing steadily since it opened."
TfL operating officer Howard Smith added: "The popularity of the new service is as we expected given that it connects the major interchange of Clapham Junction in the west with the developing area of east London."
The orbital has been dubbed the "M25 of rail" by London Mayor Boris Johnson.
It is the first orbital rail route for London since the Circle Line on London Underground was built in 1884.
The Overground now goes through 21 of London's 32 boroughs, and the orbital allows passengers to go on its different routes via Willesden Junction, Clapham Junction, Highbury and Islington and Gospel Oak stations. 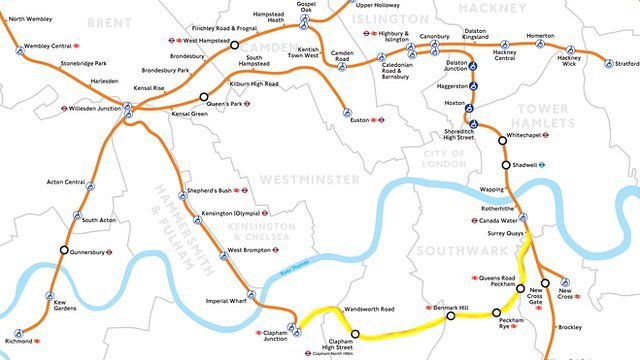