The Mayor of London, Boris Johnson, has announced that the route 24 will become the first bus route in the capital to be served entirely by a fleet of new bus for London vehicles. 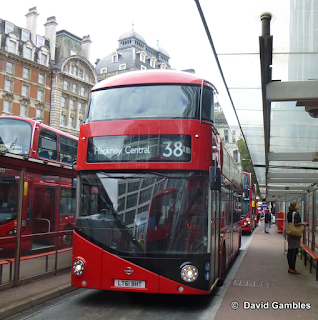 The route, operated by Metroline, runs from Hampstead Heath to Pimlico, via Camden, Trafalgar Square, Parliament Square, and Victoria and operates 24 hours a day. During peak hours, 27 of the new buses will be in operation for the 28,000 passengers who use the route each day. Currently NBfL vehicles are operated by Arriva on route 38 between Hackney and Victoria and the press statement doesn't say whether this route will revert to conventional diesel buses when route 24 converts to NBfL

Plans are in place for the route to have been fully converted by the summer. The new bus for London incorporates iconic design, echoing the historic and incredibly popular Routemaster. It uses the most innovative and cutting edge hybrid technology and is the most environmentally-friendly bus of its kind, benefiting air quality and reducing carbon emissions. 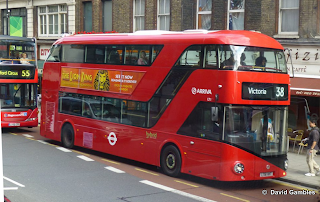 Delivery of 600 new bus for London vehicles over the next four years has been approved by the Transport for London Board, in line with the Mayor's election manifesto. This represents the largest order of hybrid buses ever placed in Europe and will deliver significant environmental benefits - reducing CO2 emissions in the capital by around 20,600 tonnes a year. The new bus emits less than half the CO2 and NOx of a current diesel bus.

The Mayor of London, Boris Johnson, said: “I am thrilled to confirm that route 24 will be the first in London to be converted to run an entire fleet of these world leading new buses, which will be the cleanest and greenest of their kind.  That particular route runs right through the throbbing heart of the capital and Londoners will be able to hop on and off at their pleasure via the open rear platform.”

Leon Daniels, Transport for London’s Managing Director of Surface Transport, said: “These new buses, which carry the latest green technology, have proved immensely popular with passengers. We are now introducing more and more of them as we build and expand the biggest hybrid bus fleet in Europe.  But it’s not just about the technology – I’m sure passengers on the route 24 will also be delighted with the ease of access and the iconic and spacious design, which echoes the best elements of London’s bus heritage.”

The buses are manufactured by Wrightbus in Northern Ireland which won a contract in 2009 to build eight prototypes with an option to produce the first 1,000 vehicles. Many components of the new bus, including engines, chassis, superstructure and seats, are manufactured in the UK.

As well as illustrating the UK's engineering prowess, the order to produce large numbers of these bespoke vehicles will create jobs and help stimulate the UK economy.
http://www.tfl.gov.uk/corporate/media/newscentre/27090.aspx
Link from Tony Wilson