According to the Arriva website amongst the revisions to the 93/X93 services between Scarborough, Whitby and Middlesbrough from March 24, will be the use of double deck vehicles.


Focus Comment. Having used the service between Scarborough and Middlesbrough during 2011 I can confirm that at times the service does require double deck vehicles. We travelled with a standing load from Scarborough the 16 miles to Robin Hoods Bay on the first service that departed Scarborough after 9.30am. Double deckers were used on some services last year and it's good to hear that Arriva are using them on the vast majority of services during 2013.

Tony Wilson comments
Now if Arriva can upgrade to deckers, why can't Trent, with the now rather out of step (so to speak), high step-entranced Red Arrow. 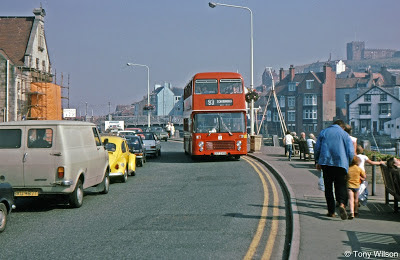 Not a particularly good image, but herewith attached is the last time I saw a decker on the 93 at Whitby, a handsome VR with United in the NBC days of August 1979. Almost typical scene with holidaymakers and a line of traffic waiting to cross the bridge. Spent many a happy hour with the family, leaning over the railings trying to catch crabs.
Tony Wilson