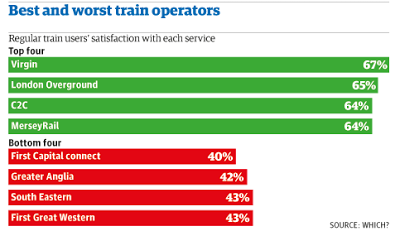 First Capital Connect has been voted the worst route in the country according to the Which annual passenger survey. The Bedford to Brighton franchise, run by FirstGroup, achieved a mere 40% satisfaction rating according to the poll of regular users.
FCC's Bedford to Brighton service is said to have some of the oldest & dirtiest rolling stock in the UK.
But other companies also came in for criticism, with First Great Western, Greater Anglia and Southeastern all coming in for criticism.

The Which? survey compiled customer scores based on passengers' overall satisfaction with a company and whether they would be likely to recommend it. Half of the train companies had a customer satisfaction score of 50% or lower, while overall, only 22% of train users felt the service they received was improving, despite an inflation-busting increase in average season ticket prices of 4.2%.
Behind Virgin at the top of the table is London Overground with a score of 65%, the London-to-Southend c2c line on 64%, and MerseyRail with 64%. The worst train operating companies for customer satisfaction are also commuter services, with Greater Anglia attaining a rating of 42%, followed by Southeastern and First Great Western on 43% each.
There was further bad news for FirstGroup as its First Great Western service was also in the bottom three as the third worst train operating company in the survey. First Capital Connect users have become increasingly vocal in recent years. One Facebook group called I Hate First Capital Connect contains robust criticisms of the company's performance and customer service, while the firm is regularly pilloried on Twitter.
One First Capital Connect customer told Which?: "The price has increased and the trains get more and more crowded. I never see any improvements for the extra money I am paying."