National Express has won the tender for two routes in Germany, whose state-dominated rail network has long enjoyed a reputation for comfort and sophistication in comparison to Britain's fractured and often criticised privatised system.
The company, which operates the London-Southend c2c route, has secured two contracts worth £1.4bn in Germany's most populous region, North Rhine-Westphalia, for the Rheine-Münster-Cologne-Krefeld and Bonn-Cologne-Wuppertal services.
Mainland European markets are usually closed to external operators and largely the domain of state-owned companies such as the powerful Deutsche Bahn. This has in turn allowed the likes of DB to enter the UK market, acquiring Arriva, the owner of the Arriva Train Wales and CrossCountry franchises. 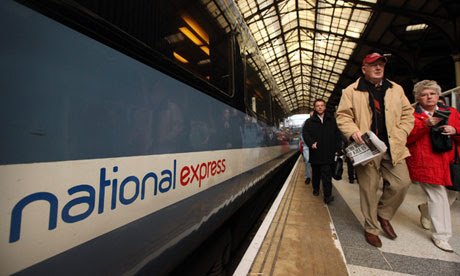 The German rail market is the largest in Europe, nearly twice as big as the UK franchising system. The National Express contracts, worth a combined €1.6bn (£1.4bn), are the first "competitive" entry into the German market by a UK player. Arriva had acquired a small German rail contract before being bought by DB. The Cologne contracts cover a slightly smaller distance than c2c and about half the number of passengers, at 18 million a year.
The move marks another step in the recovery in fortunes for the rail arm of National Express, which was stripped of the British East Coast mainline in 2009.
The company, which also has transport services in North America, Spain and Morocco, is in the running for three other franchises in Germany and is applying for licences to operate coach services in that country.