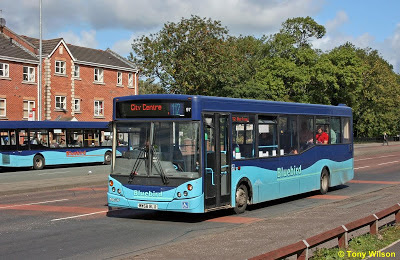 The Office of Fair Trading has yet to report on whether they consider the Stagecoach takeover of Middleton-based Bluebird Bus & Coach to "result in a substantial lessening of competition"
The deadline of 24th December for sending written representations about this matter has long passed and because Stagecoach have made this deal subject to OFT approval the 70 staff at Bluebird don't yet know the future of their jobs.
If the OFT don't approve the deal, Stagecoach will almost certainly walk away, resulting in Bluebird having to re-consider their position.
It is hoped that a repeat of what happened in Devon will not occur here, whereby Stagecoach would set up a rival operation in competition. The Devon fiasco resulted in First closing down their operation that was up for sale, resulting in job losses which wouldn't have happened if the takeover had been allowed.
The proposed purchase includes the leased depot premises, over 40 vehicles and 70 staff. There are around 30 services and contracts.
The OFT have a duty to look at the whole picture and it is hoped they will have learnt from their previous misguided decisions.