An investigation into a fire which saw passengers flee a Tyne and Wear Metro train is focussing on emergency exits. 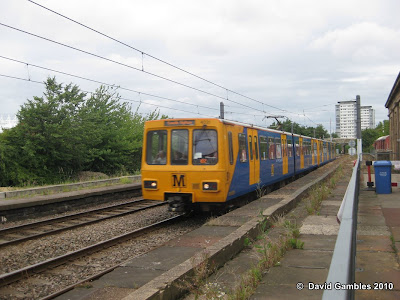 The blaze happened on 8 January on a train carrying 45 passengers between South Gosforth and Longbenton stations.
No-one was seriously hurt in the incident, which is believed to have been caused by an electrical fault.
The Rail Accident Investigation Branch (RAIB) probe will focus on emergency doors, which some passengers said were "difficult to operate".
An initial inquiry blamed the fire on an electrical fault, which in turn caused severe arcing in under floor equipment.
'Smouldering train' The danger was compounded by an overhead power cable, which broke loose and fell on the roof of the rear car, causing further arcing and a large amount of smoke inside the train.
An RAIB spokesman said: "There were about 45 passengers and they used emergency release handles to open the doors. The emergency services attended and damped-down the smouldering train.
"The RAIB's investigation will consider in particular the nature of the original fault and the use of emergency door release equipment, which some passengers found difficult to operate.
"We will also review the history and maintenance of the systems used on the Metro to protect against electrical faults in the power supply and on trains."
The Office of Railway Regulation is also conducting its own investigation.