In their latest Interim Management Statement Stagecoach say that "The overall profitability of the Group has remained good and there has been no significant change to expected earnings per share for the year ending 30 April 2013. 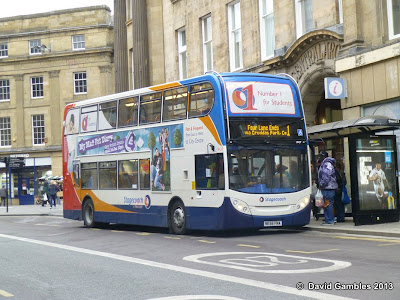 Recent extreme weather in North America and the ongoing costs of the continued focus on building business in the increasingly competitive North American intercity coach market has resulted in a lowering of short-term operating profit expectations for the division. However at a Group level, the impact of this has been largely offset by continued good trading in UK businesses and lower than previously expected finance charges" The company say that they remain excited by the long-term prospects for businesses in North America as they continue to develop the business and the megabus.com brand"

The following significant events have occurred since 1 November 2012 and further information was provided in separate announcements of the various matters:

· In November 2012, the Group announced a planned acquisition of bus operations in North Manchester. The acquisition has been cleared by the Office of Fair Trading and is expected to complete shortly.
· In December 2012, the United States Department of Justice and the Attorney General of the State of New York initiated legal proceedings against the Group's joint venture, Twin America, and others alleging that the formation of Twin America in 2009 was anticompetitive. We fundamentally disagree with their allegations and their assessment of the joint venture. Several private actions have also been filed in relation to this matter.
· In December 2012 and January 2013, the Group completed acquisitions from First Group of bus operations in Wigan and in Chester, Wrexham and Birkenhead.
· The Group's joint venture, Virgin Rail Group, agreed a contract in December 2012 with the UK Department for Transport for the continued operation of the West Coast rail franchise until November 2014.
· In January 2013, the Department for Transport cancelled the competition for a new Great Western rail franchise, for which the Group was shortlisted, and revised the timing and nature of the competition for a new Thameslink franchise, forwhich the Group remains shortlisted.