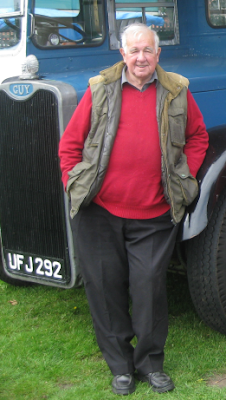 John Shaw passed away yesterday 4th April 2013. He was well known in the north east as the owner of much travelled Guy Arab UFJ 292 which spent time in service with Shaw Bros of Byers Green and was re-acquired for preservation some years ago by John who returned it to the livery of the family company.
John's health latterly prevented him from driving the vehicle but undaunted he still travelled to many events having persuaded other drivers to take to the wheel of the trusty Guy.
He was immensely proud of the bus and made it known that he would like the vehicle used to transport him during his funeral, on his final journey to Byers Green Church.
Funeral arrangements will be advised in due course.