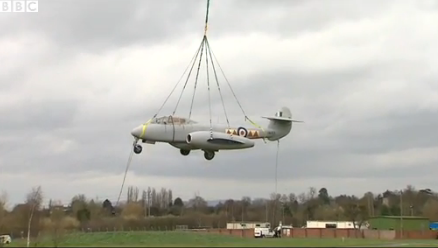 A historic jet aircraft has "flown" above Gloucestershire - carried by a helicopter.
The Gloster Meteor T7 - Britain's first operational jet plane, developed in 1940 - was lifted out of Imjin Barracks, Innsworth, by an RAF Chinook.
It was flown 1.5 miles (2.4km) above the rooftops of Churchdown to a new home at Gloucestershire Airport.
This particular model was used as a "gate guardian" by the RAF, which was stationed in Innsworth until 2008.


In 2010, the base was renamed Imjin Barracks and it became the home of Nato's Allied Rapid Reaction Corps (ARRC).
The Meteor T7 was bought by members of the Jet Age Museum - based at Gloucestershire Airport - which is due to open in August.
Martin Clarke, trustee from the museum, said: "I met my wife when she was building this (the aircraft). We were married for seven years but when she died and when the aircraft came up for sale I just had to buy it as a tribute to my wife and all of those in the Cotswold Restoration Aircraft Group.
"Flying again for the very last time... when it comes here it won't have any wings on it but it will be the only aircraft in the museum to have flown in."
Major Chris Hyde, from the ARRC, said: "I can't think of anything more fitting than for Imjin's Meteor aircraft to fly to its final destination.

"The Meteor aircraft represents a very important link to Gloucestershire's military and industrial heritage.
"It embodies a period of rapid technological progress in the region that is still represented in the area today."
Imjin's Meteor T7 was built in 1949 at nearby Hucclecote and flew some 2,000 hours until 1968.
Nine years later it was removed from service and then transported to RAF Innsworth in 1981 where it was restored and unveiled as the base's gate guardian in 1994.