Stagecoach London has relaunched the ‘Spirit of London’ bus that was damaged in an arson attack last year. 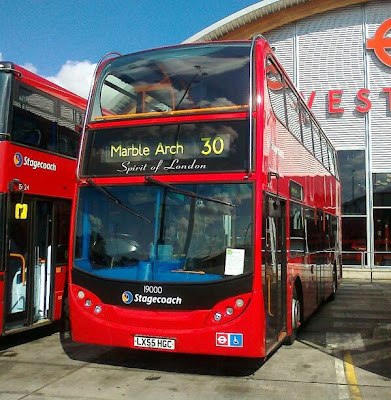 The newly refurbished vehicle has undergone significant repair work at a cost of around £60,000 to return it to operation following the attack.
The bus was originally launched in October 2005 to replace the double deck bus destroyed in the London 7/7 bombings.
The vehicle was damaged by two arsonists in October 2012, resulting in substantial damage to the upper deck.
Despite the damage, Stagecoach took the decision to repair the bus rather than replace it, due to the symbolic importance of the vehicle.
The re-launch, which took place at the London Bus Museum, Weybridge on Sunday (21 April), was attended by Stagecoach London Managing Director, Mark Threapleton, Transport for London Managing Director of Surface Transport, Leon Daniels and George Psaradakis, the driver of the original bus on July 7th 2005.
Mark Threapleton said, “The upper deck of the bus was almost completely burnt so it has taken a lot of work to get it back into service. However, there was never any question of us retiring the bus - we have always been committed to refurbishing it to ensure it remains a fitting tribute to the 13 people who lost their lives when the original bus was destroyed in 2005.”
Leon Daniels said, “It’s good news for London that this bus will be back on the road after refurbishment. The decision to introduce a vehicle to replace the one destroyed in 2005 was an important one which meant a lot to the victims’ families and to the people of London. We are very pleased that it will be back in service carrying passengers again soon.”
George Psaradakis said, “I would like to thank Mark Threapleton very much for giving me the opportunity to take part in the re-launching of the Spirit of London. When I was told what had happened to the Spirit of London I was truly sad but, looking at the vehicle after its restoration, all the sadness I felt then has now been offset with happiness. My congratulations go to Stagecoach for the restoration of the bus, I am very proud to be working for them.”
The bus will operate on route 55 in East London and will be based at Leyton garage.
The bus was first named ‘Spirit of London’ by former London Mayor Ken Livingstone in October 2005.
London’s bus network is one of the largest and most comprehensive urban transport systems in the world.  Every week day 8,500 buses carry 6.4 million passengers on 700 different routes across the capital and account for around half of all bus journeys in England.
Stagecoach operates 1004 buses during peak times on a number of routes across East and South East London.