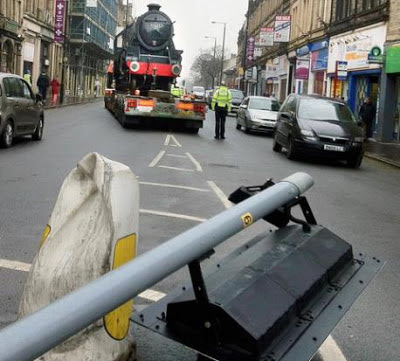 An operation to transport a steam engine on a low-loader caused chaos on the roads of Keighley.
LMS Black five 5305 from the Keighley and Worth Valley Railway was being transported from Ingrow train station to Ilford for wheel turning maintenance. A low loader from transport company Moveright International was being used for the job.
While leaving Ingrow Station, the loader came into contact with one of the antique metal poles on the gates, ripping it out of its foundation.
Later on the journey, the same vehicle hit a traffic light on the junction of North Street and High Street, knocking the unit over.