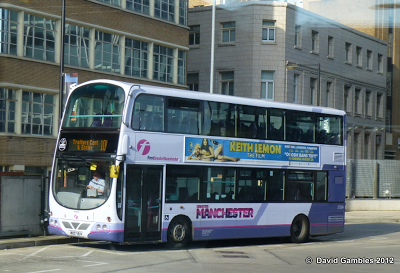 Shares in FirstGroup have plunged 26% after it announced a £615m rights issue in a bid to reduce its debt and said profit had plummeted.
The firm, which has extensive rail and bus operations in the UK as well as a bus business in the US, said pre-tax profit had plunged 86.7% to £37.2m.
FirstGroup also said Martin Gilbert, who has chaired the firm for 27 years, would be standing down.

Mr Gilbert said the firm had faced "considerable" external headwinds.
FirstGroup said net debt had risen 7.7% to stand at £1.98bn at the end of March, putting its investment-grade credit rating in jeopardy.
However, the firm said that the proceeds from the rights issue, which will give investors who already hold shares in the company the right to buy additional shares at a discount of 62%, would enable it to reduce this debt and target a return to profitability.

The capital-raising is still subject to shareholder approval.
"The £615m rights issue will finally put an end to years of investor concern about the strength of the balance sheet," said Edward Stanford, analyst at Oriel Securities.
Mr Stanford said there was now "significant scope" for recovery within the group.
FirstGroup, which lost out on a lucrative West Coast Main Line rail franchise last year after the Department for Transport made mistakes in the bidding process, also said it would not pay a final dividend for 2013 to investors or an interim dividend in 2014.
It said it would restart final dividend payments in 2014 "subject to performance in line with business expectations".