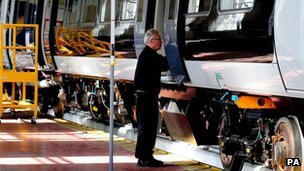 Train maker Bombardier has won an £88m contract to provide extra carriages for Transport for London (TfL).
The Derby-based firm, which laid off 1,200 staff last year, said the deal would run until 2015.
It has not yet said what impact the contract will have on jobs at the Litchurch Lane site.
The order, for 57 carriages, will allow TfL to operate longer trains and increase passenger capacity on the London Overground network.
Des McKeon, from the firm, said: "This contract underlines the strength of the long-standing relationship between Bombardier and Transport for London.
"As well as delivering new, reliable trains we are improving availability and reliability together with the operator through our fleet maintenance offering."
In 2011, Bombardier missed out on the £1.4bn deal for the Thameslink project, in London, to German firm Siemens.
The Department for Transport was criticised after selecting Siemens as its preferred bidder to build 1,200 carriages.
The government said the Siemens deal offered better value for taxpayers.