Bus passenger journeys in Scotland decreased by 3.7 per cent over the same period, and decreased by 4.5 per cent in Wales.
Comparing Q4 (October to December) 2012 with the previous quarter, there was a 0.5 per cent decrease in seasonally adjusted bus passenger journeys in England, with falls in each area type except metropolitan areas which increased by 0.4 per cent.
Quarter on quarter changes should be interpreted with caution.

Bus passenger journeys in England increased by around 15 per cent between 2004/05 and 2008/09, a period in which the English National Concessionary Travel Scheme was introduced. Growth was greater in London, with a smaller increase in the metropolitan areas outside London over this period.


Since 2008/09, total passenger journeys in England have remained broadly flat at around 1.2 billion journeys per quarter, as continued growth in London has offset a gradual decline in passenger numbers outside London.


Though figures for individual quarters should be interpreted with caution, the latest figures show a decrease in seasonally adjusted journeys of 0.5 per cent for England compared with the previous quarter. London and non-metropolitan areas decreased by 0.7 per cent and 0.8 per cent respectively, whilst metropolitan areas had an increase in bus passenger journeys of 0.4 per cent over the same period. 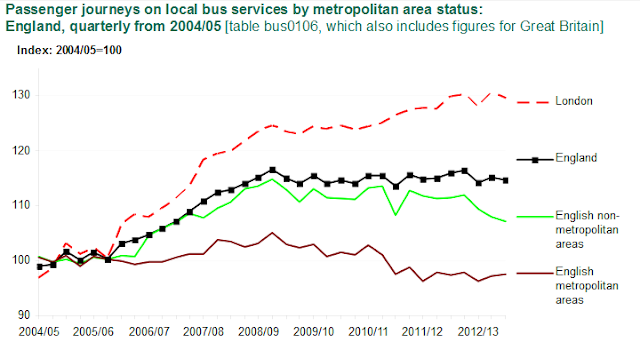 Average bus fares paid by passengers in England increased by 34 per cent between March 2007 and December 2012
1
, with a greater increase in metropolitan areas (40 per cent) than in
London (31 per cent) and in non-metropolitan areas (30 per cent increase). This compares with a 21 per cent increase in the all items retail prices index (RPI), which means that bus fares have increased in real terms over this period.


Average fares increased at a faster rate than inflation – measured by the all items RPI – in the first half of 2012 (with a 5.4 percent increase in fares in England between December 2011 and June 2012, compared with a 1.0 per cent increase in the all item
s RPI). Bus Service Operators Grant, a central government subsidy to bus operators based on fuel consumption, was cut by 20 per cent in England in April 2012.


However, between June and December 2012 fares have remained broadly flat, with an increase in fares of 0.4 per cent in England, compared to a 2.1 per centincrease in the RPI. Over this period, fares increased in non-metropolitan areas(1.2 per cent) and London (0.2 per cent), but fell in metropolitan areas (0.6 per cent). 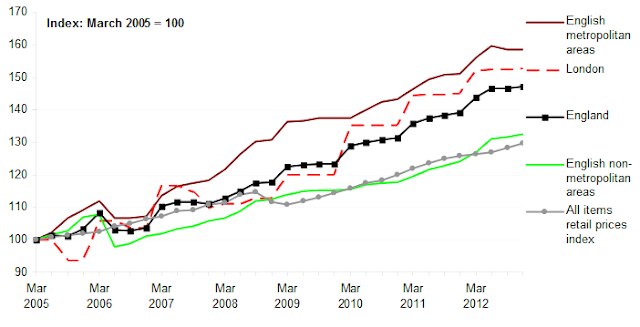 Annual statistics on the bus sector in Great Britain, covering a wider range of topics including mileage run, revenue and support, costs and vehicles and staff are published
by DfT, usually in the autumn. The latest published figures are available  here