Stagecoach Group has met its current five-year carbon reduction targets 12 months ahead of schedule, achieving an overall absolute reduction of 8% in emissions from buildings and a cut of 3% in annual emissions per vehicle mile from fleet transport. Compared to the size of its global operations, Stagecoach has cut the carbon impact (kg CO2 per £ of turnover) of its business in the UK and North America by more than 20% in the past four years.
Earlier this year, figures compiled as part of the Government's Carbon Reduction Commitment (CRC) Energy Efficiency Scheme showed that Stagecoach Group is among the top 10% of large companies in the UK for its performance in reducing the carbon emissions from its business. 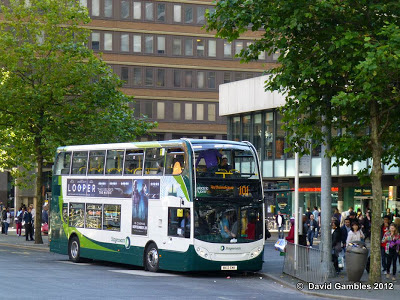 The Group's strategy has been supported by an £11million green investment programme. Employee initiatives and eco teams set up by staff have also helped drive dramatic improvements in energy and carbon efficiency. Last year, Stagecoach Group also retained the prestigious Carbon Trust Standard for its action on carbon reduction.
To maintain the momentum of the Group's programme, work is now underway to develop a new five-year strategy. This will include identifying further cost-effective energy-saving opportunities, continuing investment to make the business greener, and setting new targets around carbon reduction and water consumption. 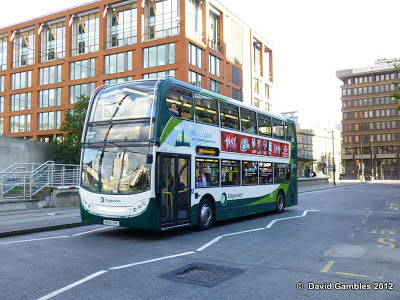 The green Bus Funding Awards announced yesterday (see below) will increase the green Stagecoach fleet from by a further 55 vehicles. The company already have over 230 green vehicles in service and the award will allow a new fleet of 38 ADL Enviro 400 hybrid electric double-decker buses, costing £10.5 million, will go into service in Manchester by 2014. Also seventeen Scania/ADL Enviro 300 single-decker biomethane gas buses are to be introduced in Sunderland at a cost of £3 million.
The new hybrid vehicles earmarked for Manchester will bring the number of hybrid electric buses operated by Stagecoach in the city to 128 – the biggest fleet of buses using this state-of-the-art technology in the UK outside London.