Waterloo International Back in Use

A passenger train has used an international platform at Waterloo station for the first time since the last European service left more than five years ago. 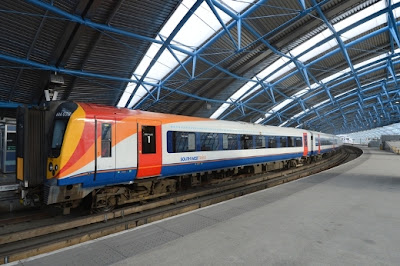 The special service from Woking pulled into platform 20 on Monday (29 April) to demonstrate that the terminal can and will be used for passenger services by April 2014.
The journey into the Waterloo International Terminal was made to mark the first anniversary of the Network Rail and South West Trains Alliance and to provide an opportunity to illustrate the alliance's commitment to provide extra capacity into the country's busiest station.
Tim Shoveller, managing director of the South West Trains-Network Rail Alliance, said: "The alliance is an industry first which was created to deliver a better railway for passengers using ways of working which have not previously been possible.
"Bringing the Waterloo International Terminal into permanent use is an example of what it can help to achieve. It has been made possible by working with many organisations, including the Department for Transport, and is vital for the much-needed development of the railway across the south and south west of England. It has been talked about for many years and we have shown it is possible and remain committed to bringing platform 20 into permanent use by April 2014 at the latest.
"The first year of the alliance has been both interesting and challenging and highlighted that by working together we can deliver better results than could be achieved by working individually. We have a strong foundation to build on and over the next six years passengers will benefit from a safer, more efficient and reliable railway with more capacity and better facilities as we continue to invest in one of the busiest railways in Europe."
A number of industry partners were onboard the train to see first-hand the improvements already underway at Waterloo and the plans in place to improve the railway for passengers.
Increasing the number of available platforms at Waterloo is vital to address the capacity challenge across the Wessex route and the alliance will continue to work with the Department for Transport to develop plans for the whole of the international terminal to be used and other platforms to be extended.
Passenger numbers are predicted to grow by 51% over the next 11 years. The introduction of over 100 extra carriages, which will start in summer, and use of platform 20 will help to provide capacity for an additional 23,000 daily peak-time passengers by December 2014.
It is just one of many improvements which will be made. The alliance is also committed to providing extra trains, additional carriages to existing services and to delivering associated infrastructure schemes including resignalling, power supply and platform extensions across the route. Extensive work is required to ensure platform 20 can be used for full passenger services which includes opening a new exit through onto platform 19, bringing signalling back into use, re-railing parts of the track, roof repairs, platform work and installing new CCTV and lighting.
Since the alliance was created in April 2012, passenger satisfaction has increased from 83% to 85% and the efficiency of track maintenance work has increased by 25%. The timetable has been amended to allow better access to the tracks for maintenance work and an emergency intervention unit has been introduced which allows faster response times to incidents which can cause delays to passengers.