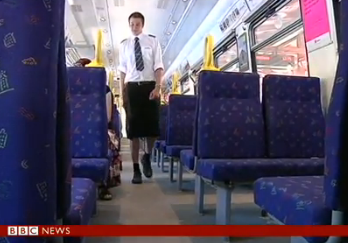 A dozen male train drivers in Sweden have circumvented a ban on shorts by wearing skirts to work in hot weather.
The workers, who operate the Roslagsbanan line north of the capital Stockholm, have been wearing skirts to work for the past two weeks.
Employer Arriva banned the drivers from wearing shorts after taking over the running of the line in January.
But the company has given the men its blessing to wear skirts, according to local newspaper Mitti.
"Our thinking is that one should look decent and proper when representing Arriva and the present uniforms do that. If the man only wants [to wear] a skirt then that is OK," Arriva communications manager Tomas Hedenius told the paper.
"To tell them to do something else would be discrimination." 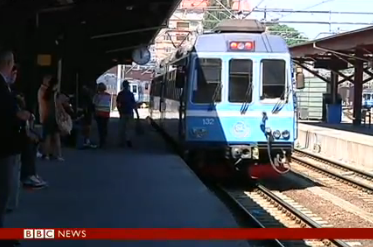 Driver Martin Akersten told the BBC he and his colleagues came up with the idea to wear skirts after they were informed of the new company dress code in the winter.
"We have always said that when summer comes, we will get some skirts and wear them. It's very warm weather here so we would like to wear shorts but if we can't then we have skirts for comfort".
The male drivers have chosen only to wear skirts on hot days, opting for trousers in cooler conditions.

"The passengers stare at us but so far no-one has said anything - well, not to me, anyway. And I don't mind as it's more about comfort," Mr Akersten adds.