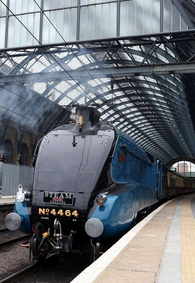 Train enthusiasts across the country got a treat yesterday, as a historic steam locomotive hit the highest speed for a its type in almost half a century.


Bittern, an A4-class engine which was built in 1937 and is almost identical to the world's fastest steam locomotive, Mallard, was expected to reach up to 90mph during its journey from London King's Cross to York.
On its journey along the East cast Main Line, it stopped off at Potters Bar, Hertfordshire, to pick up more passengers.
The run commemorates Mallard setting a record speed of 126mph near Grantham on July 3 1938 - a feat that remains unbeaten 75 years later.
Bittern, which was carrying 250 passengers, was granted special permission by authorities to exceed the 75mph limit for steam trains.
Richard Corser, general manager at organiser Locomotive Services Ltd, said: "Today is the culmination of a lot of months of preparation to make this happen, to go at a high speed and to give the passengers a bit of a flavour of what high-speed steam was like.
"This country's very famous for its engineering skills and steam was its cradle.
"We are very proud of steam heritage and railways in this country and this was shown again today by the support we have received."
Pictures here

It can be revealed that a month ago in the early hours of 29th May Bittern did reach a speed of 91.5 mph at Burnham on the GW main line during a trial run between Southall and Didcot and return. On the outbound journey 88mph was achieved, but it was on the return journey that the magic 90mph barrier was broken.
Can anyone confirm that 90mph was achieved on the journey yesterday? If so please contact Focus Transport at focustransport2011@gmail.com