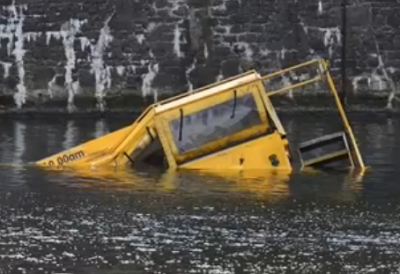 Pearlwild, the firm that runs amphibious vehicle tours in Liverpool has gone into administration nearly a week after one of its craft sank in Albert Dock.
Hale-based Milner Boardman has been appointed as administrator for Pearlwild Limited, which runs the Yellow Duckmarine attraction.
Thirty-one people, including children, were on board the craft when it sank on Saturday. Nobody was seriously injured.
Marine Accident Investigation Branch (MAIB) is investigating.
It was the second sinking involving one of the craft in three months.

The Maritime and Coastguard Agency (MCA) has withdrawn its certification on all of the firm's four vessels.
Pearlwild said on Tuesday it believed debris in the water resulted in "severe damage to the hull" of the vessel, which was one of a fleet of DUKW vehicles, the craft used in the D-Day landings.
The Mayor of Liverpool Joe Anderson has said the fleet should "not be allowed back in the water".
After one of the vehicles sank in March, all four Yellow Duckmarines were stopped from going into the dock. Three vehicles were declared safe to return to the water two months later.
The Queen and Prince Philip went on a trip around the dock on one of the vehicles during the Diamond Jubilee tour.
Pearlwild faces a separate investigation by the North West Traffic Commissioner amid concerns over the operation of the Duckmarines in 2012.
The public inquiry follows an investigation by the Vehicle and Operator Services Agency (VOSA) last year which found systems to be "unsatisfactory" with minimum standards not being met.

It will examine evidence from VOSA and Pearlwild.