Tui Travel says it has agreed to buy 60 Boeing 737 MAX aircraft, with an option to buy a further 90 of the same model. 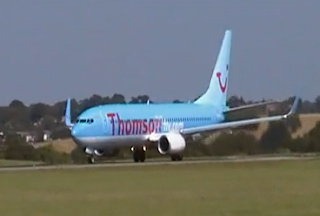 Tui said it was buying the 60 planes at a "substantial" discount to the list price of $6.1bn (£4bn).
Tui operates 141 aircraft across six European airlines - Thomson Airways, Tuifly, Tuifly Nordic, Arkefly, Jetairfly and Corsair - and said the new planes would boost fuel efficiency.
Boeing says its 737 MAX plane will burn 13% less fuel than other 737 models.
Tui, which is the world's largest tour operator with a presence in 180 countries, said it expected the aircraft to be delivered between January 2018 and March 2023.
The travel firm also has an option to buy a further 60 737 MAX planes on the same terms as the initial deal, and an option to buy 30 more on terms to be determined at the time of purchase.
Tui's last Boeing purchase - of the Dreamliner plane - ran into problems after Tui had to delay its first flights, blaming a "lack of delivery schedule" from the planemaker.
Its Thomson brand was due to start flying passengers on Dreamliners in May.
All 787 Dreamliners were grounded in January due to problems with batteries, although commercial flights have now restarted after the planes were modified.