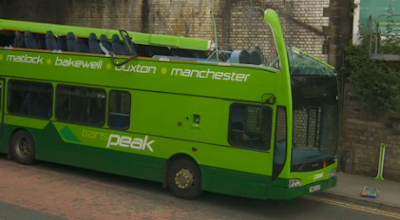 A Scania double-decker bus has had its roof ripped off after going under a bridge in Greater Manchester.
The Transpeak bus hit the bridge on George's Road in Heaton Norris, Stockport at about 13:40 BST.
A Greater Manchester Police spokesman said there were 10 passengers on board at the time of the crash.
He said six had been taken to hospital, with one man suffering a "deep cut to his head and the others [receiving] treatment for cuts and bruises".
The bus driver was not injured in the incident, which saw two fire engines, three ambulances and a number of police vehicles called to the bridge. Sgt Danny Byrne said it was "only by sheer luck that no-one was seriously injured". One passenger was sitting in the front seat and realised what was about to happen and made a dive to the floor. Initially he was trapped by the windscreen which folded over him, but managed to make his escape with no injuries whatsoever.

High Peak Buses, which runs the bus service, declined to comment on the incident. The vehicle was originally one of nine operated by London United as their SO 7 on contracted TfL routes in west London.

Pictures of the vehicle in service here