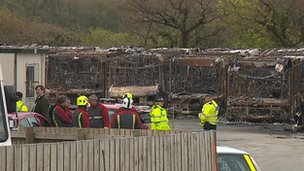 Two men from Bristol have been arrested by police investigating a fire at a bus depot in Cornwall.
Thirty-five vehicles operated by Western Greyhound were destroyed or damaged during the blaze at the depot in Summercourt, near Newquay, in May.
Devon and Cornwall Police said the men, aged 43 and 18, were arrested in Bristol on Monday on suspicion of arson and interviewed in Launceston.
They were released on bail until December.
More than 60 firefighters tackled the blaze on 13 May.
Western Greyhound said about a third of its fleet was affected.

Among the vehicles destroyed were two new £100,000 coaches and four of Truro's six park-and-ride buses.