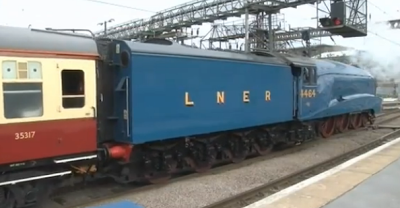 Further to our recent report here
about A4 Bittern being scheduled to run at 90mph on Saturday 29th June, it has been confirmed that a speed of 92.5mph was achieved between Grantham and Newark, making it the fastest speed which a coal-fired locomotive has travelled since steam was phased out in the late 1960s.


Three sections of the 188-mile journey totalling 66 miles – near Biggleswade in Bedfordshire, then between Grantham and Newark and finally from Arksey near Doncaster to Copmanthorpe on the outskirts of York – had been designated for the high-speed travel above the normal 75mph limit.

The service left platform four at King’s Cross at 8.18am on Saturday, and arrived at platform 10 in York at 12.25pm after stopping at Potters Bar in Hertfordshire to pick up more passengers. Two other stops were needed to take on water between Huntingdon and Peterborough and then at Retford.
Two more high-speed long-distance services are planned for Bittern in July, including York to Newcastle-upon-Tyne and another London-to-York run, although only a few tickets remain for both.
This week’s celebrations to mark Mallard’s historic speed record is expected to generate a huge amount of interest around the globe.
The museum’s senior curator of rail vehicle collections, Anthony Coulls, said: “What we’re planning is a major celebration – people will be coming from four corners of the Earth. The gathering of the six locomotives is the jewel in the crown, really.”
The surviving A4s also include Dominion of Canada, which now sits next to Mallard at the National Railway Museum after it was shipped from Montreal last October and restored especially for the anniversary.
The Dwight D Eisenhower – another transatlantic expat – has also rolled back into York and undergone a restoration for the occasion. Union of South Africa and the Sir Nigel Gresley will join them around the museum’s Great Hall turntable.