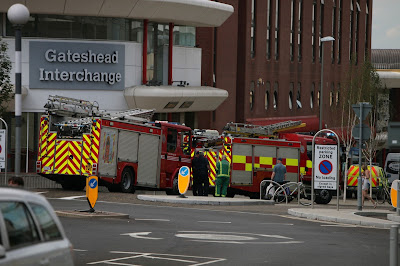 Commuters faced travel chaos when the hot weather caused Metro services to grind to a halt with passengers trapped onboard.
Emergency services, including specialists from the ambulance service, were called to Gateshead as the hot weather caused problems to overhead cables. Around 75 passengers were led to safety by firefighters when the Metro system was brought to a standstill for several hours.
The Great North Air Ambulance was originally called to the scene but was stood down without having to land.
People travelling between Gateshead and Gateshead Stadium Metro stations were stuck on a train in a tunnel for around an hour. In Pelaw, 50 travellers, including two in wheelchairs, were also guided along the track by fire crews.
Commuter Susan Key was making her way from Gateshead Stadium to Newcastle Central Station when her train stopped. The 64-year-old, of South Shields, said: “We were stuck in between Gateshead and Gateshead Stadium in the tunnel. We had to get out and walk along the track.
“The fire brigade had to come down and help us off. They were shining their lights for us and everything. We were stuck for about an hour and there was about 25 of us on the train.
“Some people walked along the footpath of the tunnel but it was tight so the fireman helped us on the track and lead us along that. It was just so dark and it was quite frightening. I’m just glad we’re off now.”
Another passenger Richard Beaumont, 21, said a driver made an announcement appealing for a doctor when someone collapsed.
The cleaner, of South Shields, said: “We were just going along on the Metro and then the Metro got stuck.
“It was just so hot. A woman had to open the emergency exit to let some air in. The train driver made an announcement to ask if anyone was a doctor because somebody had collapsed. Everyone was just so flustered.”
Bosses from Nexus said an overhead line came down between Gateshead Stadium and Gateshead Metro stations and commuters were advised to make alternative arrangements following the incident at around 1.30pm yesterday.
Trains were suspended between Monument and Heworth in both directions as engineers worked to fix the problem, while passengers travelling elsewhere also had severe delays.
Sharon Kelly, director of operations and customer services at DB Regio Tyne and Wear, which operates the Metro on behalf of Nexus, said: “It has been another extremely hot day, so our priority was to get the people off two trains which were stuck because of the power failure. The trains were at Pelaw and in a tunnel near Gateshead.
“The fire brigade attended to help the passengers to safety, as is standard procedure. We were able to move two other trains which were affected into a station, where passengers were able to get off the trains. Customer services staff were dispatched to the affected areas to help customers.”
She added: “We are very sorry for the inconvenience caused.”