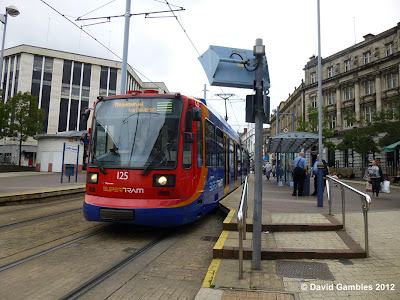 "Technical issues" have delayed work on the first phase of a £32m project to replace a section of worn-out tram tracks in Sheffield.
Operator Stagecoach said it was expected to be "resolved overnight" and the work between Spring Lane and Park Grange Croft would start today Monday 1st July.
A bus service replacing trams would continue to operate between Arundel Gate and Spring Lane, Stagecoach said.
The company advised commuters to check its website for updates.
Tram network owner South Yorkshire Passenger Transport Executive (SYPTE) said large sections of rail were close to being "life-expired".
'Progressive works'
SYPTE said measures taken by engineers had already extended the lifetime of the track by up to five years.
Despite that about 14 miles (22km) needed replacing by 2024.
SYPTE admitted the work would cause disruption for tram users and drivers, but said it was introducing a special tram ticket that would "help save passengers money during the works".

David Young from SYPTE said: "There will be progressive works over the next few years to continue to maintain the tram system in a working and safe way."
Work on the first phase of the project is expected to be completed in three months, SYPTE said.
The new rails, which are made from harder wearing steel, have a life expectancy of 25 to 30 years.

SYPTE and operator Stagecoach Supertram are funding the £32m project.