By the commencement of the new school and college year in early September, several former London operated Dennis Tridents will have transferred into the North East Derbyshire area. One will be operated by Hulleys of Baslow, whilst six transfer within the Stagecoach empire from Devon to the Stonegravels depot at Chesterfield.

They are 10.5m long Alexander bodied versions and apart from the Hulleys version, were originally configured as H45/24D, but later during their London lives, downseated to H45/23D, for dual-door operation. Their early time from delivery in 1999 onwards was spent as they operated routes throughout the suburbs of East London and the City of London’s financial districts. The modern high rise developments around Canary Wharf and the Docklands were also areas that they served, so their early years were quite varied and hard working in densely populated and worker filled areas.

The Stagecoach buses have already been converted to single-door configuration, completed prior to their transfer out of London some years ago, some initially to Cambridge and then all down to Devon. The bus bound for Hulleys though is currently in the process of conversion at the premises of Essex-based Ensignbus, prolific providers of ex.London buses to all sorts of companies both home and abroad.

A selection of images follow of some of the respective buses earlier years.

First up a couple of the buses due for operation from the Chesterfield depot of Stagecoach. 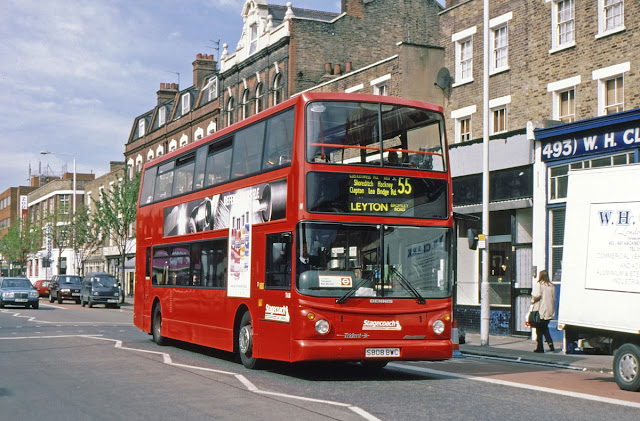 The offside aspect of TA 8 (17008) is shown during April 1999 as the bus headed east through Hoxton bound for Leyton on route 55 (Oxford Circus-Leyton). These were some of the very first low-floor double-deck buses to be employed in the Capital and indeed in the country itself. Around the same time Arriva’s London subsidiary introduced similarly bodied buses but on DAF chassis and mechanics. (Tony Wilson) 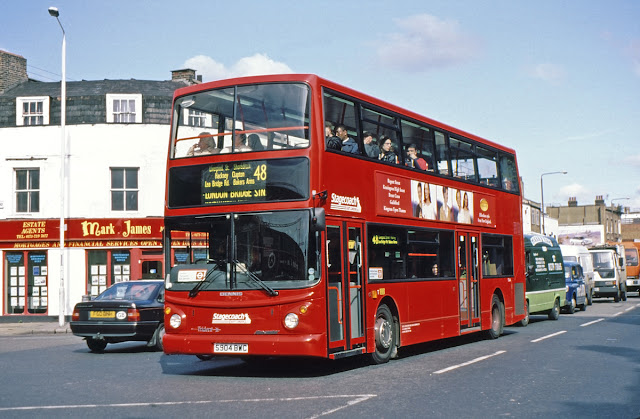 In the same area and time TA 4 (17004) illustrates the nearside and the dual-door design, but this time on the 48 (Walthamstow-London Bridge). During the period 1999-2004 946 of the Trident/Alexander ALX400 combination were constructed and delivered to Stagecoach’s London operations. 712 to 10.5m and 234 a shorter 9.9m length, later ones built under the TransBus name. (Tony Wilson) 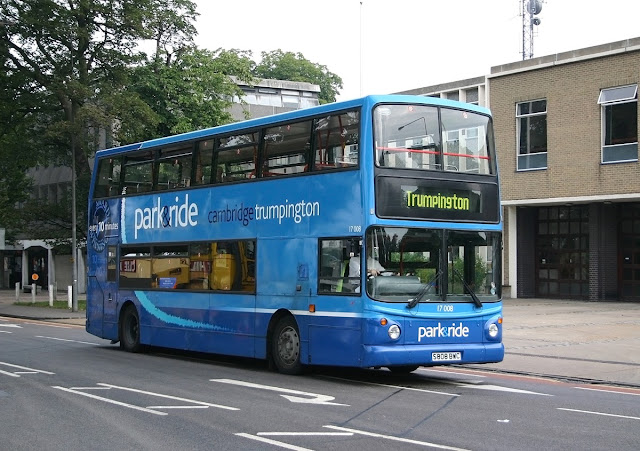 After their time in London ended, one or two were transferred north up the M11 motorway to the Cambridge area subsidiary, to operate on the city’s Park&Ride network. They were painted into blue, green or red livery for the respective routes and 17008 gained the blue colours for the Trumpington route out to the south west of the city. (Colin Lloyd) 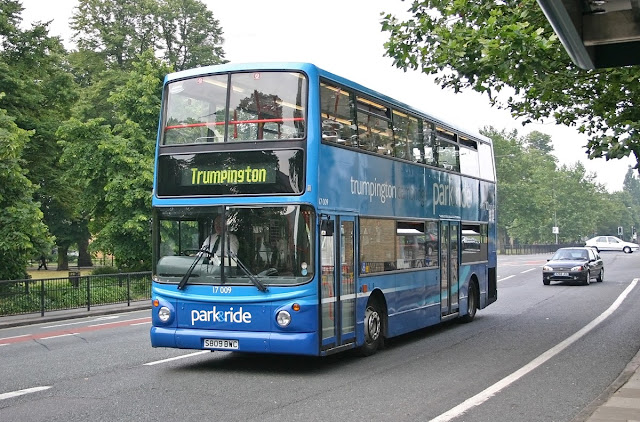 Number 17009 also gained the blue livery and is illustrated en route to Trumpington in July 2004 still with the second door intact. Almost all the earlier batches of the 10.5m long versions up to and including number 17341 have transferred out of London, most to Stagecoach subsidiaries, but several to other operators. (Colin Lloyd) 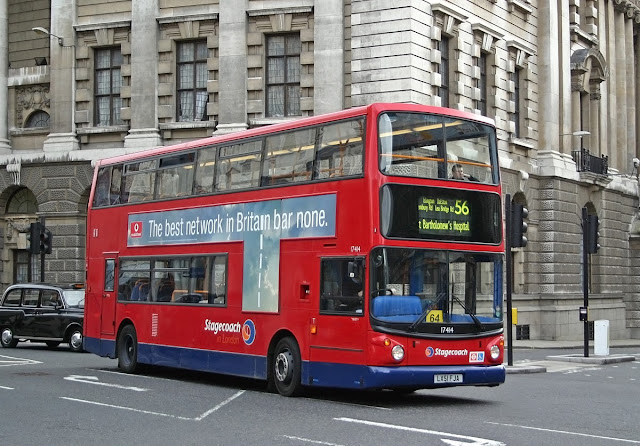 TA 414 (17414) the bus bound for Hulleys, first entered London service in 2001 from Leyton Garage and stayed there for just over 9-years in the downseated H45/23D configuration and the offside aspect is illustrated as the bus passed along Newgate Street in the City of London in March 2005 bound for St.Bartholemew’s Hospital on the long 56 route from Whipps Cross. The backdrop building is the Central Criminal Court, better known as the ‘Old Bailey’. In 2010 after a period of withdrawal, it moved south of the River Thames for a period of operation from Plumstead then Catford Garage with the Selkent subsidiary before final withdrawal from London service in August 2012, and sold the following month to Ensignbus. (Colin Lloyd) 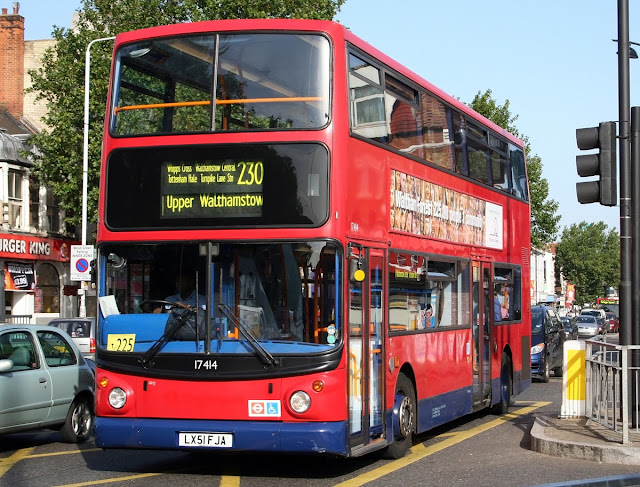 The nearside aspect of the same bus is shown here as it passed south along Wood Green High Road two years later in September 2006. This time it was on the cross-North London route 230 to Walthamstow. The two-door layout is visible, the second door pushed back towards the rear wheels. Later versions had the doorway more in the centre of the bus. (Colin Lloyd) 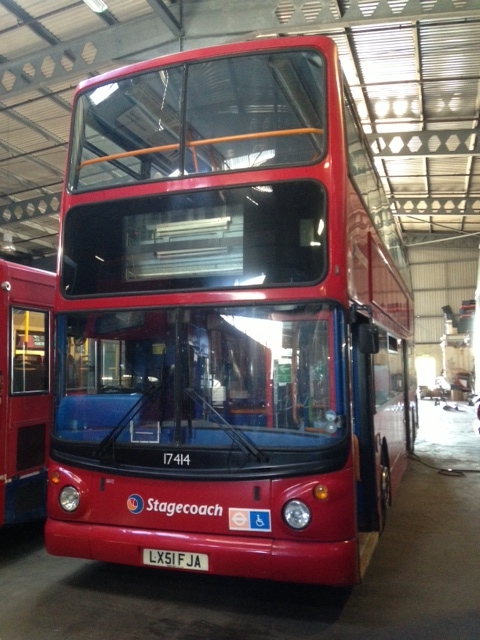 And finally. The Dennis Trident is currently in the premises of those fine and friendly bus people Ensignbus based at Purfleet in Essex and this image shows the bus in the early stages of conversion. Grateful thanks are due to Ross Newman of Ensignbus for this illustration and indeed my other contributor Colin Lloyd.

All we need now are some images of the buses in operation with their respective new companies. No doubt that merry band of local omnibological paparazzi will capture them for posterity in due course.