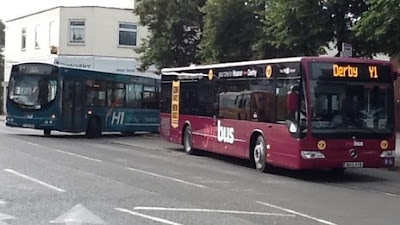 A "bus war" between two companies in Derbyshire may be bad for passengers, travel campaigners say.
The Derbyshire and Peak District Campaign for Better Transport said the two firms - Trent Barton and Yourbus - were competing for business on the same routes.
One company offered free breakfasts to commuters who chose its buses.
Trent Barton said it was sustaining its customer service, while Yourbus declined to comment.
Trent Barton, which has been operating for more than 100 years, runs a number of services between Derby, Nottingham, Long Eaton, Ilkeston and Heanor.
Yourbus, which formed in 2009, has started running on some of the same routes, within a few minutes of the Trent Barton vehicles.

On 7 August, Yourbus started accepting discounted tickets issued by Trent Barton.
On the same day, Trent Barton gave passengers free breakfasts on some of their routes.
"We don't object to competition," said Jim Froggatt, chairman of the campaign, "but we do wonder whether there is enough of a market for two players.
"We are worried we will end up in a position where both are carrying half a load and neither are making money on these routes."
He said that would mean there would be no reinvestment in the service.
Jeff Counsell, managing director of Trent Barton, said the campaign's concerns were "quite understandable".
He said: "If profits aren't at a given level, we can't sustain investment. But we are working hard to sustain a service for customers."
He said the company had offered coffee, orange juice and croissants to customers "one day last week".
"It's something we have been doing for many years as a 'thank-you' to customers for travelling with us," he said.
"Yourbus obviously won't get any revenue from accepting our tickets. They are just trying this in an attempt to pick up a few more customers."