It has been called a modern transport hub for the East Midlands.
And, according to Network Rail, the £100m redevelopment of Nottingham Station will improve reliability, reduce delays and help it cope with the station's ever-growing number of passengers.
But before then, passengers are enduring what transport groups are calling "five weeks of pain", with most services suspended between 20 July and 25 August.
So what do the closures mean for passengers? And will the gain be worth the pain? 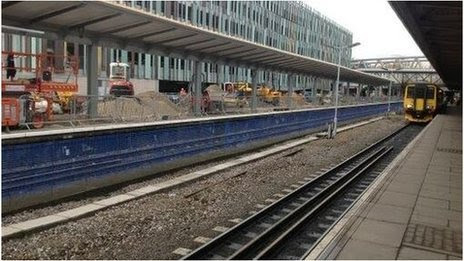 Some services have resumed at the station, which is otherwise closed for maintenance
Network Rail has said it expects there to be "no major problems" as it aims to reopen Nottingham Station on Bank Holiday Monday, as planned.
Services to Skegness and Lincoln, which have resumed after a two-week suspension, will close again on 24 and 25 August, before all services reopen.

Much of the work, which involved laying track, modernising signals and building a new platform, has been completed.
The final week will see the new system tested piece by piece before the station is reopened.
Even after the station reopens, work will continue until 2014 to complete the station's new concourse and tram connection.


Why has the station closed?

The station is undergoing two major facelifts - both to the building itself and the tracks and signals.
They are the first large-scale refurbishments to take place there since 1904.
The building redesign has been ongoing since October 2012 and is due to finish in winter 2014. 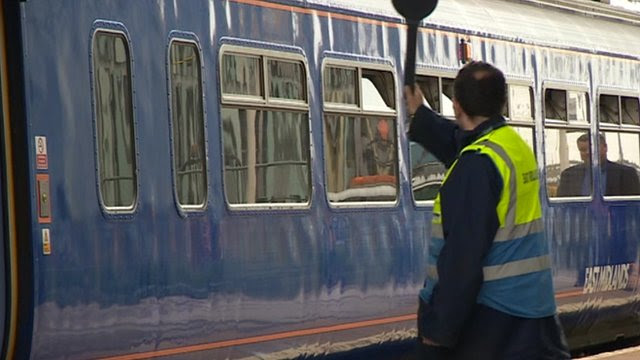 Five weeks of work in numbers

The whole station is also being cleaned and glass panels are being inserted into the platform canopies.
Extensive changes are also being carried out on the station's porch - currently a taxi rank. It will become a passenger walkway with new flooring and cafes.
But most of these very obvious refurbishments have not caused any major difference to services.
Instead, it is the five weeks of "unseen changes" currently taking place - less spectacular refurbishments such as signalling and level crossing improvements - that has seen the station close to all but a few services.
Network Rail claims this work will make a big difference to efficiency.
"Everything from the track to the signals is being dug up and replaced with new and better kit, not just at the station but in both directions," said spokesman Chris Denham.
"That will allow us to run things much more reliably and run everything much more smoothly."
He said the project is running to schedule and the new signalling system in Beeston has been switched on.
All signalling is designed with electrification in mind so disruption will be reduced when the track is upgraded by 2019.
A new platform at Nottingham is also being built.
"The platform will allow us to run more trains, more reliably through this station," added Mr Denham.